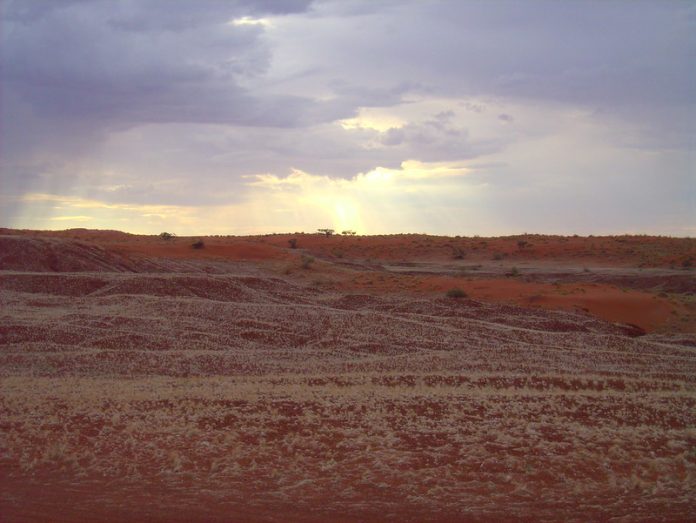 Namibia hosts pristine terrain, geologists and biologists tell us, holding vital clues from the time the planet became the right temperature to support life. The country is also host to perhaps the oldest desert in the world – more than 50 million years old, with life hidden in crevices as cyanobacteria amidst apparent aridity. The Namib Desert inspired the name of the country. Colonised since 1884 and known for a long time thereafter as South West Africa, becoming independent in March 1990 and by then known as Namibia, she would be renamed ‘Nambia’, twice, by a not-so-literate head of a foreign superpower in September 2017. What does the literature of Namibia have to say to us once we step out of the prehistoric Namib and the range of malapropism’s microphones in America?

Writing Namibia: Literature in Transition, jointly edited by Sarala Krishnamurthy and Helen Vale, helps tremendously in obtaining perspectives and insights into the real country of Namibia, literary goings-on being the main lens the editors have chosen. They have not ignored orature and performance, and this is great news for anyone fortunate enough to get a copy of this work to peruse. The Nama people named the Namib, after which Namibia is named, and Namib translates into ‘the vast place’. This vast place suggests ‘being’. The editors have chosen to problematise the simplicity of the geography by examining the aspects suggesting ‘becoming’ through literature. With about two dozen indigenous languages, Namibia has had a good portion of the contemporary literature of the land written in German and Afrikaans. The very fact that the text under review is written in English is symbolic of the ongoing transition in the literature of Namibia.

In Writing Namibia, a collection of 22 (23 together with the introductory essay by the editors) essays on Namibian narratives, poetry, performance, children’s literature, nationalist dreams and diaries of the dispossessed, we get to engage the real stuff of which this old and still emerging country is made through the lens of scholars and practitioners who have taken time to ponder the post-colonial character of the nation as well as what it means to be writing in any language in and about Namibia. There are gems for the reader here, even for those who only dip into the text from time to time. From the pithy foreword of Professor André du Pisani to the last essay by Jane Katjavivi, there is much to learn that is simply startling about the country.

A natural place to start, which this collection of essays does not miss, is the critique of the anti-colonial struggle yielding up the new post-colony. Henning Melber, the contributor, does a thorough job of critically reviewing the written literature of Namibia leading up to political emancipation and then doing a nuanced reading of the contemporary reality of Namibia since independence. One recognises that it is a familiar (African) trajectory. A lot of hope driving the struggle and the promise of a prosperous society upon emancipation. The lived experience of Namibians today is however not so rosy.

Melber suggests that the journey to equitable living and distributive justice is a much more painstaking one and that writing has a part to play in it. Most crucially, he concludes that the generation which is going to carry the struggle beyond the limits set by SWAPO is in the making now.

In her chapter, ‘Gathering Scattered Archives’, Margie Orford explores the asymmetry between orality and literature in Namibia. Her approach is empirical and she focusses on the efforts of women in the production of both orature and literature. Orford gives the reader a first view into the recorded lives of women in a society under assault by colonialism, capitalist conquest and apartheid. She features correspondence from the ‘reserves’ (euphemism for concentration camps) and it is heartbreaking reading. The subtext always hinting at the horror of caged human liberties. It is emerging now that the Nazi did a trial run of the genocide against Jewish populations in Europe first in Namibia against the Herero, the Nama and others who raised a finger to question German rule. Orford’s findings show how practices such as the enforced examination of unmarried Namibian women for venereal diseases occupies the intersection of the personal and the political in colonial Namibia.

Jason Owens and Sarala Krishnamurthy engage the autobiography/memoir of Misheke Matongo and through it exile and, through exile, the upended lives of children in exile. Some 400 Namibian children were sent to the German Democratic Republic (GDR). They became known as GDR children. Matongo was one of them. He lived his formative years in the GDR and then returned home to Namibia when the GDR crumpled. He travelled to South Africa and was not heard from again. This chapter is full of information and also of silences and qualifies as one of the most haunting.

Closely allied to the story of uprooted children in Namibia is the tale of the literature the children of Namibia consume. At this moment of transition, it is perhaps as important as any other genre of writing in Namibia, requiring, perhaps, greater thoughtfulness. Good literature is expensive to produce but children should be given access to literature in as many languages as the society can afford, with premium placed on the mother tongue. The actual logistics involved is daunting but perhaps Namibia may have a lesson or two to learn from Nigeria in that regard.

In her rather wide-ranging interview with the poet and playwright Keamogetsi joseph Molapong, Helen Vale elicits from the poet an understanding of the human condition in Namibia today and the context in which the poet works, the themes in the works, the state of theatrical production and the reception of these works post-independence. All of these are material but the rendering of the poet’s name, with the small joseph in it, makes the interview read like roman-a-clef.

In ‘Keeping a Pet Bushman Alive’, a riveting chapter in the book, Professor Helize van Vuuren tackles alterity in the Namibian narrative oeuvre of Piet van Rooyen. She notes that except for one book in van Rooyen’s Namibian tetralogy, death is an ubiquitous presence and not just regular death but death by poisoned arrows. The exploration of this fixation on exotic death is itself a polarity when juxtaposed with ‘keeping the Bushman alive’. It is not difficult to see why the popular imagination of settlers and prospectors chose self-preservation for themselves (and death for the Bushman by implication). The moral compromise of the settler at some point is to keep the Bushman alive as a pet.

This state of affairs is, of course, untenable and van Vuuren concludes that the author is hard put to imagine a positive way forward for the new society in Namibia in which the ways of the Bushman are ‘gone for good’. The task of the writer in Namibia, it is implied, is to find an imaginative resolution to the quandary in which the quest for capital meets a most primordial fear in man, that of inexorable death at the hands of other men of other races.

In his treatment of the Namibian novel (of which there is a scarcity), Professor Brian Harlech-Jones assays many questions from a few fixed epistemic coordinates. He reiterates that fiction is not fact, a point worth remembering when the Namibian novel is considered or is being considered as a lens for viewing the society. Having reminded the reader of what the novel is not, what, then, is the novel? Harlech-Jones highlights some of the novel’s most salient features as ‘…initial conflict, well depicted characters, developing tension and carefully crafted resolution…’.

Novels, Harlech-Jones further states, are important because they are built on individual characters and have the power to shape sensibilities. This is important because, inevitably, the generation that won liberation for Namibia will eventually die out but the literature will not necessarily suffer the same fate. He concludes by stating that the outlook for the Namibian novelist is challenging, nevertheless, worth engaging.

The scholar/practitioner Nashilongweshipwe Mushaadja in his treatment of applied theatre in Namibia develops a provocative discourse on community and the ends of applied theatre and drama. The perspective here is valuable in itself but even more so because it benefits from a praxis that has spanned Botswana, South Africa, Namibia and Zimbabwe. There are many assertions to critically examine in the discourse but also many touchstones.

Writing Namibia engages with Namibian film and performance arts and maps what the practice was during colonialism and what it is today. Ruminating through the ensemble that is film, the lives of Namibians is said to have been presented to viewers as much as it is possible to do so through film. There is a strong argument to be made for the filmic medium particularly. Namibia is still in the process of resolving the language question and film grants a more universal access, all things considered.

Much to the credit of the editors, Writing Namibia finds coherence as a whole. The exhortation to those observing a dancing masquerade not to be static but to move to new positions the better to see what the masquerade is doing is one which the editors heeded, to their credit.

But, were one to read only this anthology for initial vital glimpses into the soul of Namibia, one would remain oblivious of the alluvial lure of diamond mines and the littoral riches that have brought so much sorrow to the aborigines of that land. One would be stumped explaining why the architecture of the country or the street names are so very different from what obtains elsewhere in Africa or why Namibians drink so much. One would perhaps, reading hard between the lines, begin to understand why gender-based violence is a problem in contemporary Namibian society.

One hopes that the book goes into an expanded second edition where some of the lacunae can be redressed. This is a fascinating country with fascinating stories worth telling and retelling. The methodology of the book, which embraces a reading not only of text but of film and the semiotics of society should yield a much greater haul should the editors have a second go at it. A number of new writers and filmmakers have emerged in the discourse of Namibia today. One would have loved to see not only the highbrow treated in this iteration of Writing Namibia but also the midbrow and lowbrow, riding solar-powered motorcycles in the Namib.

In the way that things happen in a globalised world, contributions to the book under review came from writers and scholars from all over the world. It was published by the University of Namibia Press and the actual printing was done in America. That last detail, perhaps, is as telling as any on the state of literary production in Namibia today.