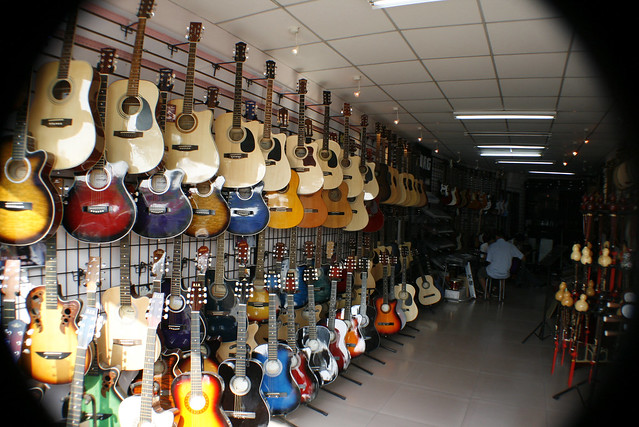 Segun Akinlolu is a jack of all trades. Known to fans of his music and poetry as Beautiful Nubia, the man counts music as his first love. This is despite the fact that he has spent a major part of the half century of his life engaged in almost everything but music. He is a historian who reads extensively about Nigeria’s pre- and post-colonial past. He is a writer of fiction and poetry. He has four published collections and three recordings of poetry readings. He is a qualified veterinary doctor. He has also been a salesman of veterinary products, a journalist and a worker in the factory of a Canadian sweet manufacturer. What he is known and loved for though is his music. He is a songwriter and singer of original compositions of Nigerian folk music, with twenty-three recorded albums. The autobiography, Sounds of Joy, performs an exhaustive and sometimes exhausting task of casting a light on all the nooks and crannies of Akinlolu’s life.

Sounds of Joy is a dense book. The 344-page tome goes into the granular details of Akinlolu’s life growing up in Ibadan, the most populous city of Oyo State, on the southwestern side of Nigeria. His arrival into the world in 1968 came in the middle of the Nigerian Civil War. The bloodshed precipitated by the Lieutenant Colonel Chukwuemeka Odumegwu Ojukwu-led secession from Nigeria and the establishment of the short-lived sovereignty of Biafra opens the autobiography. Akinlolu’s compassion and love for his country, together with his despondency at the opportunities wasted by corrupt politicians are conveyed in impressive prose from the very beginning:

For me, the lingering image of that war is of the children, captured forever in those black and white pictures with sunken eyes, protruding [t]ummies, sallow skin and gaunt limbs, closer to death than life; and hapless mothers with shrunken breasts hopelessly watching as life faded from their progeny (p 8).

The context of the Biafran War meant Akinlolu’s formative years occurred during times when politics intruded into the lives of everyday people. As NoViolet Bulawayo depicts it in her book We Need New Names, while one might think children are impervious to grown-up things like post-war politics, they are very much aware and are shaped in their thinking by these events. Throughout the book, Akinlolu exhibits a keen interest in and the requisite disdain for the graft and maladministration that plagues Nigerian politics even today. His comments on the Abacha administration of the 1990s, at a time when he was trying to inject some fuel into his music career, demonstrate a frustration informed by insights into the problems created by African governments:

I resented the many roadblocks put up by the unapologetically, openly corrupt Police. And it was not unusual for me to accuse them [to their faces] daring them to shoot me as they always threatened. But my deepest resentment was for the people in government personified by the dark-goggled Sani Abacha (p 256).

Akinlolu describes in the book a very tumultuous relationship with his own father. ‘Baba Sound’, meaning father of sound, was the nickname Akinlolu’s father was given as the owner of an electronics and music shop in Iyaganku, Ibadan. The shop was named ‘Sounds of Joy’ and it is where Akinlolu was first introduced to the varied world of music, from traditional music to highlife, from trado-contemporary to juju, reggae, African pop and everything in between. He recalls his father as a boisterous socialite who was also a shrewd businessman. Looking at the early photos of Baba Sound included in the book, with iconic sunglasses and a stylish air pilot’s hat, you get the sense of a ‘head in the clouds’, 1970s hipster, in the vein of South African, Tsonga pop artist, Paul Ndlovu’s 1980s single, ‘Hita Famba Moyeni’ (We Will Walk on Air). Baba Sound was far from breezy though. A polygamist who fathered twelve children with four different women, Akinlolu’s father was an obstinate, abusive and difficult man. These characteristics helped him in his business achievements but intruded on the rights of his wives and children. When Akinlolu was nine years old, his father brought home a new wife with no warning beyond that of the door bell.

Daddy’s cousin had come by for a visit only to meet his prospective host some distance from the house… ‘He had his new bride with him and wanted to take her inside but couldn’t find the courage to break the news to your mother’ [said Baba Obadire]. Baba Obadire met MaSegun in the sitting room… Warm greetings duly exchanged, he launched into his narrative. It was not a proposal waiting approval; it was already decided: ‘My dear, your husband has taken a new wife and she’s moving in today’ (p 76).

Thus ensued constant fighting between Baba Sound and Akinlolu’s mother, MaSegun, leading to the woman, patience worn to the bone, moving out of their home and into her own mother’s flat. Despite all the trouble his father gave him and his brothers and MaSegun, there is a sense of endearment that comes through when Akinlolu talks about Baba Sound. Even the reference to him as ‘Daddy’ conveys a son longing to make his father proud.

Akinlolu’s warm and fond memories of his mother and grandmother contrast with the hardships endured and the tough environments in which these women found themselves at the time. Akinlolu attributes his best traits to these matriarchs:

I was born by one woman but I had two mothers… My birth mother, the beautiful, robust one with sonorous voice…wanted me to be an upright, extremely honest, loving and hardworking person, and a high achiever. Everyone called her MaSegun (Segun’s mother)… Mama Agba (the older mother) was the best grandmother any child could have. She taught me the basics of ancient wisdom and traditional African philosophy – the tenets of communalism, truth, good neighbourliness and tolerance (pp 1–2).

And it is these traits that Akinlolu displays in his life. His work ethic and determination has shone through in all his achievements. He found his love for the creative side quite early on, composing songs for games he invented with his fellow nine-year-old friends while growing up in Ibadan. Throughout secondary school, he put together self-made magazines with content enjoyed by his peers and wrote and performed poetry. In his early teens, he even completed a 200-page, crime novel manuscript, written in longhand and mirroring the style of Ian Fleming, James Hadley Chase and Harold Robbins, all international masters of popular fiction. In his days at the University of Ibadan undertaking veterinary studies, he was editor-in-chief of various periodicals, from the campus magazine, The Parrot, all the way to the hall of residence magazine, The Pioneer. He also produced an annual scientific journal for his faculty called The Vet Surgeon. Even at his longest served employer – the veterinary products company Animal Care, in whose employ he stayed for seven years – Akinlolu published one or other manual or module or booklet.

What then led him to study veterinary medicine? The limitations and pressures of career choices for black youths. Most teachers and parents have a set basket of professions to which they would like to see high-achieving students go: medicine, law, engineering and accounting being the top four. Akinlolu encountered the same pressure in his final year of secondary school. Asked by his class teacher what he wished to study at university, he offered that he would be keen to try music:

Taken aback by my response, she called upon several other teachers. They all expressed surprise that a student who possessed all-round academic brilliance would want to study something in the arts… ‘Well I’ve thought of becoming a doctor too’, I said tentatively. That met with cheeky approval… My literature teacher was quick to remind me that Birago Diop, whose poems I’d always loved, was a veterinary doctor (p 143).

Akinlolu’s autobiography spares no detail, not even the most arbitrary or banal event or observation from his background (the long-winded and often confusing family trees that trace ancestry were not necessary for the book). Yet the book lacks a certain eloquence in articulating the story of how his love for music developed. He says at a number of points that music has always been his one true love, but it is only in the last third of the book that the urgency with which that passion burns is conveyed. Only during his didactic digressions on life values and virtues does one glean a sense of passion and purpose in the writing. In the first two-thirds of the book, the recollections of encounters with music and artistes and songs fail to convey that incendiary soul shift that places all else in second place. It is also curious that only one of the many love interests spoken of in the book is named. In fact, there is something prudish about how Akinlolu remembers his romantic relationships.

The book also borders on tiresome verbosity as the author inserts tangential and sometimes non-sequential recollections at odd places and flexes his vocabulary muscles with ill-fitting synonyms in other places.  In as much as he displays a writerly prowess with his prose, there are instances where the language invades the narrative. Nevertheless, there are beautiful passages that evidence the poet in Akinlolu. His depiction of a time of deprivation when he had to rustle up a motley dinner for himself and his brothers leaves a distinct picture in the mind:

Driven to desperation, I eventually went scavenging in the disused pantry, found some aged, weevil-riddled dried yam, shrivelled, dried up bits of okra, discoloured fingers of hot peppers and rancid oil remnants in several bottles. I ground up the yam into powder and made chaffy amala and then I cooked the okra in oil with the pepper and my brothers and I feasted on the resulting mish-mash as if it was a fancy meal in a 5-star hotel (p 126).

Sounds of Joy is a collection of memories and reflections from Akinlolu about the formative years of his life. It is the story of a talented youth forced to toe the line of conventional career choices, the lot of most young Africans who are imprisoned by the lack of economically viable options. It is the story of the author’s battle for fulfilment and happiness, and a triumph that confirms the old adage: the heart wants what it wants.