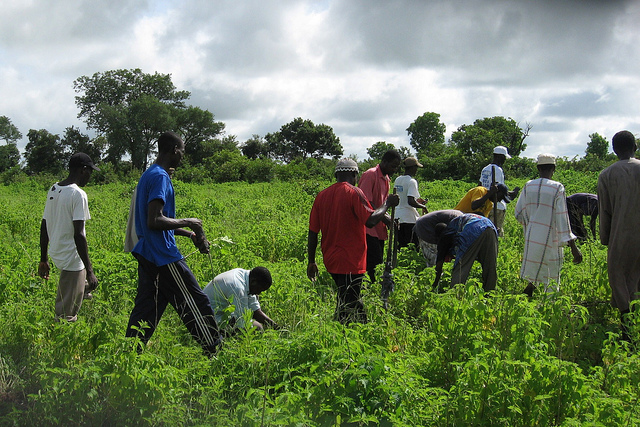 One of the cultural practices of Africans is narrating stories in their various indigenous tongues to children in social gatherings. From mythic tales that recount the origins of the human race to proverbs and wise sayings that teach wisdom, storytelling takes a focal position in social and educational enterprises, with both aesthetics and didacticism being emphasised. However, narrating folktales under the moonlight has metamorphosed into a significant part of what is referred to, today, as African Children’s Literature.

The decline of oral traditions due to the advent of industrialisation and technology has increasingly caused children’s stories in Africa to be told through textual and audio-visual productions. Lil’ Kanji and the Falling Sun is one of such textual productions. The story is about the dream of a boy named Lil’ Kanji. In the morning, after he wakes up from his dream, he goes to school putting on green rather than his red uniform. When he is questioned by his parents, teachers and friends about his action, he replies, ‘The sun is angry at red things…. I do not want it to fall on me’ (p 17).

As the story unfolds, the other school children join him in wearing green uniforms to school. This draws the attention of the headmistress, Mrs Kaberia, and Lil’ Kanji’s teacher, Teacher Kijani, forcing them to address the strange action of the pupils. Lil’ Kanji relates his dream to his teacher, and Teacher Kijani asserts that Lil’ Kanji’s dream is highly symbolic. She interprets Lil’ Kanji’s dream in relation to ecology. For Teacher Kijani, green, a symbol of peace, takes pride of place over red, which symbolises the destruction of nature. She further educates her pupils on the role of carbon dioxide and how planting more trees will help to cool the earth:

She told them how the sun’s heat warms up the earth during the day, and how at night, as the earth’s [sic] cools, the heat is released into the air. She told them how this heat from the earth surface is trapped in the atmosphere, making the earth warmer and warmer each day. Teacher Kijani explained the role of carbon dioxide gas in all this and how planting more trees will help cool the earth (pp 39–41).

Ecological cleansing and the preservation of plant cover are advocated, to make Lil’ Kanji and Mama Sun happy. As the narrative pushes on to the end, Lil’ Kanji’s dream inspires changes in the school and the entire society as laws are made to ensure a clean environment with less carbon emission. Finally, the school uniform is changed from red to green.

Written in the omniscient point of view, Lil’ Kanji and the Falling Sun, as short as it is, can be read using different literary approaches. One reading of the story can be developed through the theory of psychoanalysis, to wit Sigmund Freud’s ideas about dreams, repressions, ego, id, super ego, the conscious and the unconscious. In the case of Lil’ Kanji, it is the author, at one level, and characters in the book, at another level, who attempt to give an interpretation of dreams.

Lil’ Kanji’s dream is Oedipal in its negation of the school’s uniform in favour of environmental conservation. This is one reason the expression, ‘The sun is angry at red things’, occurs so often in the book. The desire to make Mama Sun happy is a sexual sign that repudiates the abuse of nature and the negative effects of that on humans. Lil’ Kanji’s dream also indicates that the conscious mind cannot cope with a number of unsavoury truths. For this reason, the dream comes as a threatening voice in the psyche of the protagonist. Altogether, an understanding of the Oedipal drive is largely compatible with the repression which  initially pushes thoughts about Mama Sun out of the protagonist’s consciousness and into his unconscious.

Another reading of Lil’ Kanji and the Falling Sun is possible through ecocriticism, also known as green studies or environmental literary criticism. This kind of reading seems appropriate given the main theme of the story, that is the advocacy for environmental protection in the archetypal urban setting. As far as children’s literature is concerned, Gituro is in the category of writers who use literature to promote or reinforce the need to reduce the activities creating environmental hazards. The story addresses the survival of humanity on this planet. It foregrounds the consequences of human excesses in this age of environmental crisis. Lil’ Kanji and the Falling Sun deals with the degree to which Africa is harrowed by air pollution. Gituro uses his work to provoke thoughts on the destruction of trees, toxic waste and air pollution:

Mama Sun is not happy with the smoke that comes out of our factories. It makes it difficult for her children to see how beautiful the earth is. Mama Sun said her children are dirty because they cannot take a bath in the river. We have thrown rubbish and factory waste into the water. She also does not want us to cut down trees.

As a symbol and an image, the sun is a frequent subject in children’s poetry, music and film. In a Romanticist reading, Lil’ Kanji and the Falling Sun shares similar thoughts with William Wordsworth’s ‘The World Is Too Much with Us’. Gituro’s philosophy is similar to Wordsworth’s on the idea of nature. In Lil’ Kanji and the Falling Sun, the doctrines of Romanticism – which include the love of nature, the fleeting nature of the physical world and the like – are recognisable in Lil’ Kanji’s beliefs and his love of nature. As young as the protagonist is, the adoration of nature is presented as his core interest:

Lil’ Kanji was fascinated by nature and it showed in most of his drawing and paintings. He loved to paint trees and rivers. He also drew and painted wild animals in their habitat (p 14).

In this fashion, Lil’ Kanji and the Falling Sun examines the interaction between children and their social environment. The extent to which the book goes, even though it is children’s literature, to engage the problematique is remarkable. Also, the many possible readings of the text demonstrate that Gituro’s Lil’ Kanji and the Falling Sun is an important work of children’s literature that should be recommended to students of all ages in Africa and the world over.

In Lil’ Kanji and the Falling Sun, Gituro is both a writer and counsellor, advising teachers to incorporate the telling of jokes and stories in their teaching, as a substitute for corporal punishment. When the teacher realises that corporal punishment will not solve any problems, she calls upon Bambloo the Clown to entertain the children and find out the root of the psychological trauma troubling the mind of Lil Kanji:

Teacher Kijani figured that punishing Lil’ Kanji and the other pupils would not solve the problem. She needed to know the real reason for Lil’ Kanji’s fear…. In the afternoon the sun kept getting hotter and hotter. The children kept looking up at the sky. There were no clouds. The sun was falling. Everyone was sweating. Teacher Kijani had invited Bambloo the Clown. Bambloo always came to school events to entertain the children. They all loved him. Sometimes Bambloo wore a red and yellow outfit. His wig and nose were always red. But on that day, he was in a green dress and a green wig. His blinking nose was orange. He had a hard time convincing the children it was not real so he told them a story (pp 27–28).

As with many other children’s stories, didacticism finds its place in Gituro’s book. The tale is a seed of moral values. Some of these values are introduced using Lil’ Kanji’s personal traits:

Lil’ Kanji was very obedient and hardworking. He always helped his mother in the vegetable garden behind their house. He also had six potted plants that he watered every morning and evening before and after school (p 15).

The children who read the book are instructed to be well-behaved and disciplined both in school and at home in order to make their dreams come true.

Aesthetically, Lil’ Kanji and the Falling Sun has good illustrations that are age-appropriate and vividly capture children’s experiences. The illustrations in the book evince an understanding that children appreciate good illustrations that help them develop their own mental pictures. Songs are also part of the text to ensure the active involvement of the reader. The book also shows that clarity and simplicity of expression are crucial in children’s literature. The importance of repetition as a literary device is evident in the repetition of, ‘The sun is angry at red things’. Also, words and expressions such as ‘inter alia’, ‘photosynthesis’, ‘ozone layer’, and ‘carbon dioxide’ will improve children’s vocabulary. Despite being a children’s book, Lil’ Kanji and the Falling Sun caters to adults as well. The story is flawlessly written using simple diction to make the reader – children, especially – think.

Photograph: ‘Tree Planting Day at the High School’ by dorothy.voorhees