A Flood of Titan Tears for a Nigerian Century 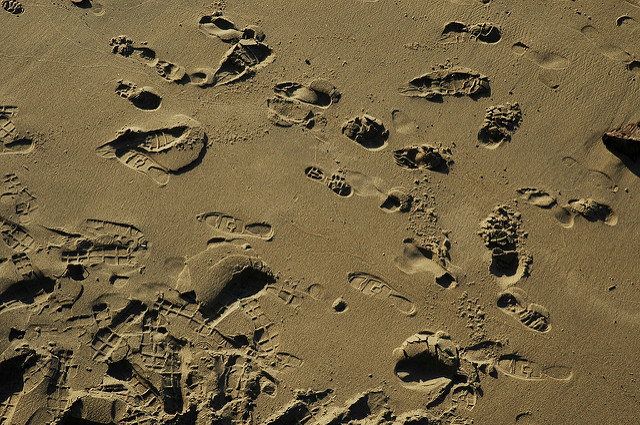 Nigeria marked a century since its amalgamation in 2014 and to celebrate this, there were several events including a number of offerings from the literary community. Two standout anthologies of poetry in this mould include Poems for a Century edited by Tope Omoniyi and Footmarks: Poems on One Hundred Years of Nigeria’s Nationhood edited by Professor Akachi Adimora-Ezeigbo and Naza Amaeze Okoli.

Seventy-two poets, mostly award winners and titans in their own right, form the impressive line-up of this anthology. The list of the heavyweights include Uche Peter Umez, Chijioke Amu-Nnadi, Unoma Azuah, Funmi Aluko, Alex C Asigbo, Chukwuma Anyanwu, Saddiq Dzukogi, Ismail Bala, Ifeoma Chinwuba, Mike Ekunno, Obari Gomba, Shittu Fowora, Jumoke Verissimo, Obiwu, Tares Banigoe Oburumu, Kola Tubosun, and Tope Ogundare, to mention a minute few. Reflecting on this, the editors note in the foreword that they ‘were pleasantly surprised to receive excellent contributions from different parts of the country and even from some of the best poets in the Diaspora’ (p 4).

The greater part of the anthology has frustration, anger and sadness colouring the words such that one might have suspected the editors had asked the contributors to send in poems with a tinge of anger or despair. Thus, poem to poem, poet to poet, the pages turn with bleakness or pain written.

Ade Abua begins the anthology with the lamentation ‘First Light’ which speaks of a need to sing songs ‘for a toil-torn clime’, ‘a tongueful land’, ‘a land enmeshed in the muddy sweat of noisy years’ and for ‘a people buried in the future of a reddish past’. It ends on a note of a prayer that gathering winds will blow the people to the crossroads of water and blood for cleansing.

Akachi Adimora-Ezeigbo makes a contribution of six poems that, like most of the poems in the anthology, are bleak covering violation, kidnapping, shame for a nation, war and all. They are largely summarised in the last two lines of the poem, ‘No Relief in Our Tragedy’ thus, ‘The drama continues, a nightmare without end,/ Will no one draw the curtain to end this tragedy?’ (p 29).

Chijioke Amu-Nnadi in the long poem ‘Jos’, and to a lesser degree in ‘Abuja’, captures the geography and culture of these places while extending the focus to Nigeria as a whole in lines that show sadness and disbelief at growing evil. The poetic persona notes in ‘Jos’ that:

i passed a little girl at lokoja
seated in a 911
staring as the fishmonger shook
as though to rouse
as in her, as in our country
a dead fish fluttering like a [flag]

In his other contribution, ‘A Simple Dream’, Amu-Nnadi gets more forceful and less lyrical. It is however in ‘The Monster Thinks’, dedicated to Olusegun Obasanjo, that anger brims. The poetic persona declares:

[m]y tongue is koboko the whip
that strikes and is not broken
the strom that is not [stilled]
stirring the thunders and lightning
stirring the bile of our anger
clouds that grow darker yet (p 60).

One notes that in all the poems, Amu-Nnadi uses small letters à la e e cummings.

‘Cows Graze on Our Green Grasses’ by Ifeoluwa ‘Dele centres on the now common menace of suspected herdsmen versus farmers. The poet persona notes that while the cows eat, their herders have guns. All those who dare defy the herders are killed. There is fear in the land and the people become speechless but hope abides that things will be better for a farther generation as shown in the last lines:

Though our tunnel is dark
We see the new lamp of love
Brighten on our children’s children’s faces (p 115).

Though one would applaud these last lines for the hope it expresses, one cannot help but feel that these lines do not have a strong tie to the preceding lines and seem almost forced. It seems the poet just tacks on those final lines in order not to sound too gloomy.

Moyo Ekundayo’s single contribution, ‘Retrospect’, questions the sadness of the several atrocities that have happened in Nigeria. The poem reads:

Can you quantify the tears of a hundred years
Cries silenced by gagged clothes
Groans muted by pointed guns? (p 122).

It goes on to ponder killings, displaced people, poverty and the helplessness of one who has to stop writing before paper gets ‘soiled with tears/ Bloodshot tears/ Boiling tears/ [Of] a weeping Nigerian’ (p 123).

Still following the route of pain, two poems, out of the four by Mike Ekunno, in the anthology, ‘Waiting for the Alert’ and ‘Unspent’ look at the frustrations of an empty pocket as well as the sadness of unfulfilled dreams.

And all I ask for is to feel,
Drops of dew
Cracking across our leaves
Healing,
The stomata on our fabric
Dews, hued anew like jelly
And daubed softly
on the abscess of our chaffed humanity (p 142)

The chaffed humanity shown in the commonplace street madness of jungle justice is the theme of Matthew M Umukoro’s ‘The Ghastly Victims of Aluucrazy’. The poem chronicles the fate of the four students who were murdered in Aluu:

Brutally bludgeoned and battered
By the horde of hateful hunters,
The weird quarries of haunting [game]
Stripped, punched, pummelled and pounded
Into deathly submission, and deadly comatose
Before lighting the consuming [conflagaration] (p 307).

The poem looks on the killing of the four as a senseless celebration of evil where the victims were killed, then turned into kebab, ‘grilled and roasted/ For a bloody and bizzare communal [Feast]’ (p 307). The comparison with a feast evokes the seeming excitement that accompanies lynchings on the streets of Nigeria. The poet calls it all a shameful satanic feast that reduces the country, even as the poet imagines the hapless quartet finding peace in a cool celestial paradise, away from the hell on earth that is Nigeria.

Jumoke Verissimo’s ‘West’ is a short poem that seems like some therapy and a pleasant departure from the greater gore of Footmarks. The short poem reads:

Lean against me
Fish stars
In my eyes
Feel nothing
But love. (p 310)

It is almost like the poet persona is practicing some form of therapy, refusing to see what is without but reaching within to feel love in a place that should otherwise breed hate. Her other poem, ‘Open City’ is an apostrophe of various dimensions, which looks at uncertainty, what one may call covert despair, madness and a definite search for healing.

Tonye Willie-Pepple ends the anthology with four poems. He begins with ‘Man of the People’, named after the Chinua Achebe novel and dedicated to the late author. In this eulogy for Achebe, Willie-Pepple uses the titles of the various works of the great African author in a string of stanzas. This is best captured in the first and last stanzas of the poem:

Like Mango seedlings on the floor
Things have fallen apart,
Like girls who are at war,
We are no longer at [ease]

There was a country indeed
That had a tireless soul
There is a country today
Whose “Man of the people” is gone (p 312–313, emphasis added)

His other poems ‘Sing not the Ichabod Song’ and ‘The Old River Bank’ are somewhat nostalgic and pessimistic poems that speak of lost years of beauty and which end the anthology on a sombre note. This pervading gloom seems to be a proper representation of the greater proportion of the book that largely boasts poems that are not positive or praising of Nigeria. The editors agree with this when they state that:

Naturally, one does not expect to find many poems that praise Nigeria or celebrate her one hundred years of nationhood, but it is sad that hardly any poet has anything positive to say about the country. The attitude of nearly every poet that contributed to the anthology is critical, satirical, condemnatory and sometimes abusive or disdainful (p 5).

One can summarise all the frustrations and pain in Rasaq Gbolahan’s ‘1960’ which seems to curse the Nigerian independence which brought the country into a definite nationhood:

Footmarks is a collector’s item, especially because of the ‘names’ that it brings together between two covers. It would appeal to people who love simple poetry as most of the poems are not the overtly dense poets-only type. The differing angles and styles that the various poets bring to their subject will also be of appeal to readers. It is worthy of note that the poets are from different generations and are representative of the full expanse of Nigeria. It can be said that together their various voices offer a rounded story of the Nigerian project, showing its beauty and ugliness as seen through different lenses. However, as with anything art, the final appraisal will lie in the eye of the reader.