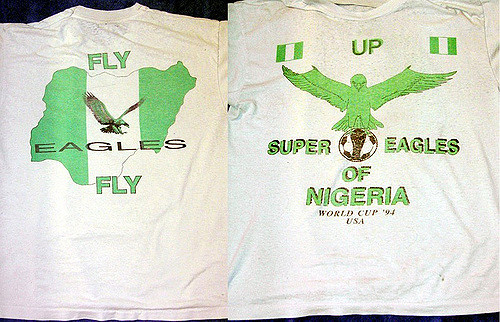 Wiebe Boer’s fittingly titled A Story of Heroes and Epics: The History of Football in Nigeria adds to the lean catalogue of books on Nigerian football history. Boer was born and raised in Nigeria, and his book is an expansion of his PhD dissertation. In twelve chapters, he details the development of the game from 1904, before the geographical area became known as Nigeria. Relying on interviews, archives and newspaper articles he creates a masterfully crafted summary of his subject.

Many of the country’s early nationalists were either players themselves or ardent fans, or promoters. From north to south, football was a unifying factor. Obafemi Awolowo, one of the ‘founding fathers’, wrote about his own encounter with amateur football as a young man in the 1920s. Samuel Ladoke Akintola, Premier of the Western Region, was said to have played the game in school in the 1920s. Alfred Rewane, a prominent politician in the post-independence period, led a successful two-month football tour that boosted his public profile at the grassroots.

But it was Nnamdi Azikiwe, Nigeria’s first (and only non-executive) president who contributed most significantly to its development in colonial times. He recalled playing on the streets of Lagos as a secondary school student in 1915. By the time he left Nigeria for higher education in 1925, he was already well-grounded in both football and other sports. When he returned in 1938, he founded Zik Athletic Club, the achievements of which are well documented in A Story of Heroes and Epics. Boer notes that, ‘For a time, ZAC members were something of a “who’s who” in Nigerian sports’. Like Rewane, it did not harm his political base. Rewane’s goodwill tour of 1941–1942 featured nine strategic towns which eventually became some of the country’s political and commercial hubs post-independence. As with the other nationalists, he was quick to grasp the importance of football as a unifying force in an otherwise disparate collection of over 200 ethnic groups yoked together by colonial fiat.

On the wider stage, football was used as an ideological tool. For instance, Kwame Nkrumah pushed his pan-Africanist agenda through the ‘Nkrumah’s Gold Cup for West African Competition’, which reflected his desire for a unified West African country. Similarly, press coverage of Nigeria’s early football matches demonstrated just how much the people imagined the country into existence. A tool of cultural domination became a tool for nationalist agitations, as Boer writes:

[Nigeria] was a member of the world governing body of football almost a decade before independence and membership in the United Nations. Football, therefore, helped lead the way towards Nigeria’s independence and emergence in the international community.

The several tours the national team embarked upon and the relationships they established helped to introduce the nascent country to the world.

Refreshingly, the author is also interested in the development of women’s football, whose turbulent history – unsurprisingly – reflects the effects of the prevailing patriarchy, but there was also the colonial legacy inherited from the English Football Association, as Boer explains:

If given the proper support, Nigeria women’s football may have taken off. Unfortunately, in 1950, following orders from the English Football Association to which they were affiliated, the NFA declared that women’s football should not be encouraged. Also following the English, the NFA mandated that games in which women participated were not allowed to hold on pitches or be officiated by referees affiliated to the NFA.

This shows the extent to which the English and Nigerian football associations were ready to go to keep women out of the game. However, patriarchy and misogyny notwithstanding, Nigeria’s female football teams at all levels have been largely successful. ‘While it took them only two years to make it the top, it took Nigeria’s men 61 years from the initial national organization of the game to accomplish the same feat’.

To live up to its title, the book includes 44 pages of ‘Nigerian Football in Photos’, making it all the more authoritative. Old newspaper clippings are included in the narrative to support the claims and connect them to the actual events described. Coming from a Nigerian with foreign parents, the book is commendable and it is expected that, on account of this, many will be encouraged to dig into Nigeria’s little examined football history.