Identity and Language in When We Speak of Nothing 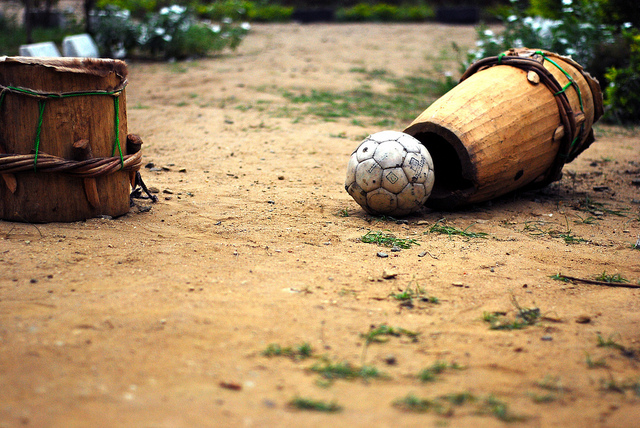 The one word which comes to mind on reading Olumide Popoola’s When We Speak of Nothing is daring. It is a daring novel, without inhibitions in terms of language and its portrayal of identity. The novel – set in London, United Kingdom, and Port Harcourt, Nigeria – is a bildungsroman of the two teenage protagonists, Abu and Karl, on the verge of eighteen, questioning and seeking out wholeness and authenticity in life and, just as important, a place in the world where they can live out this authenticity. Karl lays this bare in an honest conversation with his mother when he says, ‘There is no wholeness. Nowhere I really am…I was not here. I didn’t exist’.

The story takes us through Karl’s journey of self, which sees him heading off to Nigeria to escape the daily taunts in London and to find out about his father, whom he has never known. In Nigeria, he befriends and learns from Nakale, a university student and activist, of the devastating consequences of the oil spills in the Niger Delta. And while in Nigeria, he falls in love with Nakale’s cousin, Janoma.

Abu is in the same quandary as Karl. He thinks to himself, as he ponders the maddening construction taking place in the King’s Cross neighbourhood where he lives:

A crack might open and make the whole area disappear, swallow it whole … A hole of nothing and underneath major chaos piled up on each other, invisible from the world about. He felt like that sometimes. Nothing. Invisible. All the chaos of him hidden underneath.

While Karl is away in Nigeria, Abu finds himself falling in love with Nalini, a fellow student at his school, and together they learn about slavery in the eighteenth and nineteenth centuries and its connection to where they live. He also finds himself caught up in the full-scale riot in London that follows the death of Mark Duggan, who was shot by the police, bringing to the forefront simmering racial tensions in the city, particularly the treatment of minorities which Abu feels personally as he is used to ‘hateful looks’ just for being a minority living in Britain.

Despite the inner turmoil of the protagonists, Popoola sets these two teenagers as unyielding in who they are.

‘I cannot accept your behaviour.’

No one had asked. No one had talked about behaviour. Karl had spoken about being. Being himself.

In her depiction of identity, through these characters, Popoola emphasises the idea of being oneself and staying true to that, even when confronted by people and life’s events. The characters and their characterisation is the skilful, genius touch by the author that allows her to translate her message effectively. Despite life’s confrontations, the characters continue to believe in being and living as they are.

There is also a depiction of the multiplicity in identity, in relation to self and in relation to others: a person is different things to different people, at different times and places. Black, Asian, queer, working class, child, parent, friend, British, Nigerian, etc. All the characters live out one, two or all of their various identities at different times and in different places. As the characters relate with one another, these identities interact and negotiate in space and time for the creation of an authentic life without burdensome inhibitions. And, it is these relations and encounters with others that provide the rich milieu for the emotional development of Abu and Karl. They are transformed by friendship, love and the sufferings of both the past and the present as they learn about slavery and oil spills.

The depiction of authenticity goes beyond characterisation to the very language of the book itself. As Karl meets and greets people in Nigeria, he thinks to himself:

He smiled and smiled and spoke proper English. Some of his teachers would have missed a beat and stumbled if they could have heard him over-pronounce his very well indeed. How are you sir/madam?

The author stays true to her characters, who they are and where they live: the inner cities and working class of London and Port Harcourt. The reader feels immersed, swimming through the varying densities of English spoken by teenagers in present-day, inner-city London, the Pidgin spoken by the locals Karl encounters in Nigeria, and even textspeak, when characters use the digital medium to communicate.

As a reader, it may be difficult to follow the various modulations of this novel if one is not familiar with the various forms of English that are given voice in it. But, even though sentences may take longer to read and understand, this unapologetic writing by Olumide Popoola is welcome. It is necessary. There is a certain dominance of a particular way of speaking and writing. However, through this insidious dominance standards are set, creating divisions in identity that stifle and discriminate between persons. When We Speak of Nothing confronts this domination, and with it one should certainly demand and look forward to reading more literature in English in all its forms.