In Search of a New Order 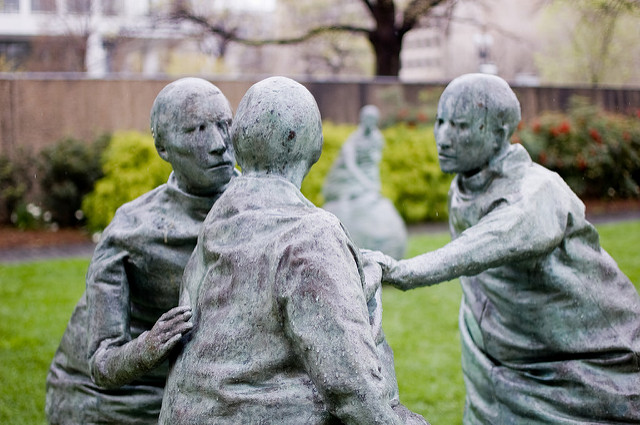 One of the most powerful assets a nation has is its youth since it is they who contribute the most to the output of the nation. Across the world, political aspirants invariably campaign on the promise that they will prioritise the concerns of the youth. In Africa, the youth, who are the overwhelming majority have been uniformly sidelined, even though the difference between ‘developed’ and ‘developing’ countries turns on how the latent potential of youth is harnessed.

Conversations about the Youth in Kenya is based on articles previously published in Kenya’s Daily Nation. The author, Raphael Obonyo, grew up in a ghetto but decided to devote his life to making his country a better place. He comes off in his own writing as the poster boy for the possibilities of the very demographic he is writing about. The book’s blurb states that he was nominated for the 2015 UN Nelson Mandela Award, among other honours. In other words, he personifies the grass-to-grace story expected to inspire his target audience.

The six short chapters of Obonyo’s book read like a treatise on youth inclusion and draw on history to explain repeated government policy failures. The first chapter, ‘Solution to Kenya’s Youth Unemployment’, chronicles the efforts of successive governments at ending youth unemployment and draws on official documents such as the Brookings’ 2014 report titled ‘State of Youth Unemployment in Kenya’, which states that the youth constitute about 70 per cent of the working-age population. However, the author does not just chronicle the problem; he examines the various initiatives undertaken over the years, including the Youth Enterprise Development Fund, the Uwezo Fund, the Kazi Kwa Vijana programme and the National Youth Service, and concludes that they all failed simply because the beneficiaries were not involved in the design and implementation processes. In his own words, they ‘treat youth as mere consumers of the various initiatives the government creates…’.

Perhaps the author’s most plausible claim is the government’s overemphasis on formal education. He states:

Kenya needs to remodel the education system to achieve development goals. The education system lays emphasis on formal education, paying little attention to imparting other skills that would not only transform the economy, but also create jobs.

In proffering a solution to the unemployment crisis, he advocates that the country take a cue from Nollywood, Nigeria’s home-grown film industry which has created millions of jobs and is currently the country’s second-largest employer. He urges the government to invest in the arts and sports, and also help out with affordable loans. He concludes by warning that ‘the surging youth population combined with the high rate of unemployment and rapid urbanization threaten political stability, social cohesion and economic prosperity of the country, and should be addressed’.

The second chapter assesses the definition of youths in Kenya’s 2010 constitution as ‘all individuals who are between 18 and 35 years’. The author prefers an alternative definition: ‘a period, as well as a state of mind, associated with imagination, change, freedom and prosperity’. He further asserts that ‘it is critical to note that if youth is viewed as a mere biological stage, young people will be ignored at present, and Kenya’s development goals that require active participation of young people will not be realized’, although one might argue that admitting the middle-aged to the group on the spurious grounds that they are ‘imaginative’ seems to defeat the purpose.

To buttress his point that youths are not restricted by age, the author cites the examples of Professor Wangari Maathai and Tom Mboya, both of whom began their careers as youths but ended up contributing to the struggle for reforms. He also encourages young people to take charge of their collective destiny:

Most importantly, the Kenyan youth must act as the engine of change. To execute their mandates as agents, youths must guard against patronage that undermines their agency and subverts the constitution.

The third chapter, ‘Kenya’s Multi-Party Politics and Elusive Youth Agenda’ traces the history of parties and elections in Kenya. He notes that, although the founding fathers were all youths when they participated in the discourses and activities to secure independence, things changed when the new elite seized power and excluded the youths. The author opines:

Young people’s brand of politics must be different – their approach and engagement in politics must stand in stark contrast to that of the elderly ruling elites – it should be based on principles and values’.

In the fourth chapter, ‘Youth Development and Public Participation in the Counties’, he asserts that there must be devolution of power, and that youths in otherwise underserved communities should be given the opportunity to enact change. He says:

Youth must be at the centre of devolution to address some of their problems including unemployment, lack of political participation, and vulnerability, among other challenges. To improve the conditions of youth, county governments should develop robust economic programmes and inclusive policies that target young people.

The fifth chapter, ‘Digital Government and a Digital Generation’ touches on the high cost of participation in politics as a discouragement to well-meaning young people willing to be part of the democratic process. In the next and final chapter of the book, Obonyo examines regional integration, preaching a sort of pan-Africanism that he explains will help reduce youth unemployment and other challenges that African youths face.

The strength of this book lies in the illustrations that accompany each chapter. Also, the language of the book is accessible, making it readable for people of all ages, unlike most policy and development books. The book is well designed. However, the author seems to unduly idealise the youth as the sole solution to Kenya’s problems, disregarding the melancholic fact that some among them have proven to be no different from the elders they otherwise criticise. The emphasis should be on values that are enduring and not age. In spite of this, the book ignites conversations that any serious nation should be having at this point in history.