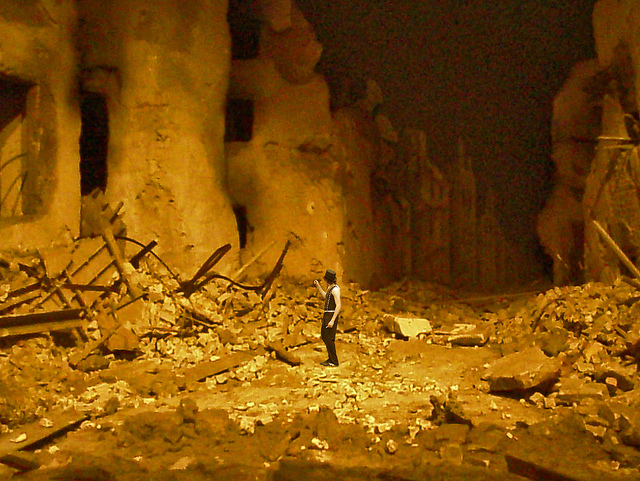 Roy Fotheringham, the protagonist and a largely unreliable narrator, tells the story. Roy is an average man who has a dull job as the manager of a virtual reality sex club. He is beset by average problems: a broken marriage with a divorce looming on the horizon, a stalled career going nowhere, a strained relationship with his father, and a drinking problem – all of which seem like the beginnings of a midlife crisis.

On the day of the incident that changes it all, Roy escapes from a failed dinner party to the house of a female friend, who may or may not have gone on to become a lover, where he spends time drinking and ruminating on his life. He eventually sleeps off for about two days and wakes up to a world where everybody has disappeared, along with most of the trappings of life as he knew it. The book tells the story of his wanderings, eventual discovery of a few other people, and life after the ‘Incident’. Dub Steps, like Stephen King’s The Stand, James Dashner’s The Maze Runner and other similar books of speculative fiction, offers a vision of a post-apocalyptic world.

The book opens with a chapter simply titled ‘You’. This is a letter from Roy to the reader and serves as a prologue of some sort. This is then followed by sixty-two ‘chapters’ of varying length. The longest of them is Chapter 46, with nineteen pages, and the shortest – Chapter 38, titled ‘A Month’ – is three sentences:

A month to rig up solar panels.

A month to get control of the simulator and figure out how to program a flight plan.

Each chapter is titled with a phrase, sentence or sentence fragment picked from within that chapter. They are not usually statements of any great or apparent import. Examples of the titles include, ‘We did our chores’, ‘Just look at this grass’, and ‘Very, very busy’.

The chapters are collected into five parts. Part I tells the story from before the apocalypse up to the point when Roy first discovers another survivor, and spans Chapters 1–15. Part II, comprised of Chapters 16–28, deals with finding other survivors, and the politics of the new settlement. Part III, Chapters 29–43, describes the ennui of the new life, relevant but difficult decisions on matters such as inbreeding, to perpetuate the species, and a series of unfortunate events that deeply affect the survivors. In Part IV, which spans Chapters 44–54, the reader begins to get an idea of what triggered the end of the world. Part V is the anticlimactic end: the survivors are almost all dead and their offspring are very disappointing.

Andrew Miller makes heavy use of musical terminology, as in the book’s title, and has a unique way with words that makes for interesting reading:

I have destroyed my life, in small increments, each thoughtless step adding unbearable weight. The framework, superstructure of Roy, has been knocked and beaten and rendered fundamentally fragile. All it took was one punch. A single fist (p 24).

As is the case for many academics, Lillian’s empathy gland appeared to have been severed at birth (p 118).

The turns of phrase are interesting until the reader trips on certain words and expressions. Perhaps these could partly be explained as the book being true to its futuristic setting. Words are shortened arbitrarily and, sometimes, the word that has been shortened is not immediately apparent, so ‘graffiti’ becomes ‘graf’ and ‘algorithms’ become ‘algos’. When the reader comes across an expression such as, ‘The shot is close enough to make out a Woolworths bag in one of the graf boys’ hands…’, it may take a minute or two to realise that ‘graf boys’ refers to the boys who paint graffiti.

There is a fluidity in the form that words take in Dub Steps, even within the same chapter. ‘Fucking’ could start out as itself then it quickly becomes ‘Fokken’, in a few sentences, before ending the chapter as ‘Fucken’. Names, too, change rapidly. PE becomes Port Elizabeth, and the name of one character vacillates between ‘Teboho’ and ‘Tebza’ for a bit. And many times, the short form or uncommon usage precedes the more common form, making one wonder, for instance, what exactly a ‘PE’ is.

Miller writes in a loopy way. The reader is suddenly introduced to events or things that have not been previously mentioned in a manner that suggests that the reader is already familiar with them. Miller then continues in that vein until he suddenly decides to explain what the event or thing is, without warning and sometimes in a way that is distracting.

Even more disconcerting are the references that pepper the book, referring the reader to certain sections in certain libraries. These references start early enough in the book – p 11 – and one is unsure whether the libraries exist in reality or not. Two-thirds of the way through the book, the reader realises that Roy is referencing a library that has not begun to be collected. Some readers might find this a clever ploy, this reader found it disorienting.

Again, this book raises the vexatious question of who a writer writes for. Is it for himself, a select few or a wider audience? Dub Steps is intensely South African. All the references to places and things are South African. This is fine unless it is done in a way that unduly alienates readers who do not have a South African compass with which to chart their course. Is ‘bakkie’ short for baked goods or is it a vehicle? When a passage begins, ‘She can’t help it if her father is a prick’, and ends, ‘We shouldn’t drag babies around when we do this. Take her, please. Asseblief’ (p 225), what conclusion is a reader with no Afrikaans to draw? The meaning of the word is please. Google was a very helpful, albeit distracting companion in the reading of this work.

Dub Steps might be the poster child for the unmarked use of non-English words in a largely English text. Is it right to give the reader fair warning, perhaps in the form of italicisation? Or is it more appropriate to allow the reader run smack into the word and wonder what it means? Is this courtesy important in a book that throws in some Zulu words, for which even Google is no help, with the Afrikaans and English ones? When the writer uses ‘poes’, is he writing in English, Dutch or Afrikaans? Why does ‘skies’ suddenly appear in the middle of a sentence that has nothing to do with skies?

As storylines go, the reader will hear strong echoes of Lord of the Flies in Dub Steps. Although both books are different enough, the former is supposedly about children and the latter begins with adults and ends with adults and children. Again, Lord of the Flies is not, strictly, a post-apocalyptic novel. Nonetheless, one cannot get away from the striking similarities between the two novels: from the tussles of the survivors, though these are a little muted in Dub Steps and more complicated than being just about power, to the accidental killing of Jabu, to Roy stumbling upon ‘Madala’ towards the end of the book. Madala are beings that are superior to humans, and they seem to know what triggered the apocalypse. Part V of Dub Steps is similar to the film Idiocracy – the dumbing down of future generations, complete with bastardised English as in the film.

At a few points, Dub Steps seems to go off on a tangent, and this reader is unsure of the value of those excursions. Roy is not exactly portrayed as a mental case, yet the reader is treated to a graphic portrayal of some of the perverted things he does when he erroneously assumes that he is the last human on earth. Roy begins to display an almost insatiable desire to violently destroy property and piss and shit in people’s houses, and especially on their pictures. After meeting his first fellow survivor, he adds the collection of teenage girls’ underwear and pictures to these disturbing habits. However, these practically disappear when he meets the larger group of survivors. All these leave one wondering why. Why was borderline coprophilia important in the grand scheme of things?

Dub Steps is a hard and unsatisfying book.