Prime Suspect: Guilty or Not Guilty? 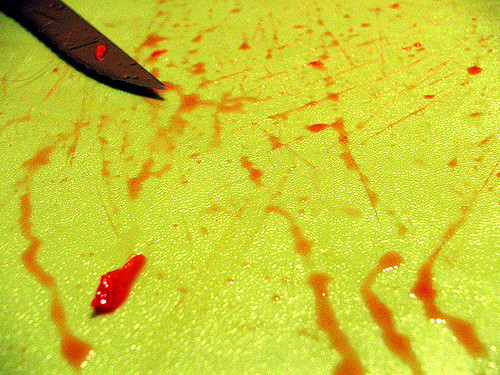 ‘The true test of democracy is in the police stations and not in the dome of parliaments’. – Abdelilah Hamdouchi

When only the circumstantial facts and evidence of a case point to a person as guilty in a repressive police state, where the police are reckless, hostile, shoddy and can coerce a false confession out of anyone, then one has already lost the trial before it begins, that is if there will be any trial at all. One will easily be convicted for a murder especially when there is an ostensible motive.

This is the precarious position in which young Othman, the protagonist of The Final Bet, finds himself when his French wife, aged 87, is found murdered, and the knife that is the murder weapon has his fingerprints all over it. The only person who can provide him an alibi is his mistress, who has been waiting in the wings for such a murder to happen. How to untangle the mess: confirm the guilt of the suspect or find the real culprit so that the innocent will not be unjustly convicted? This is the plot of The Final Bet.

But who is Othman that he should be so easily framed for a murder? The author lays bare the character’s secret, patriarchal and sexual anxieties when he describes Othman as living under the pretext that he symbolises ‘virility’. This is the image of himself that he sells in order to escape his humiliating poverty: Othman is a gigolo.

When the police place him under watch following the murder, he escapes before they can question him further. First, he goes to his parents’ house to tell them of his fear that his fingerprints might be on the murder knife. But they already despise him for marrying someone older than his mother, the shame they have lived with in their neighbourhood.

His sexual relationship with a woman much older than him is a morass of contradictions that violates the moral code of what is expected of young men in the Maghreb. This aspect of the story mirrors the economic reality facing young Moroccans, one in which they are exposed to expatriates and a luxury lifestyle that they are unable to afford. Some young men marry rich Europeans for a taste of this affluence. For Othman, who always wanted to emigrate to Europe, illegally through the Strait of Gibraltar, ‘when he met Sofia, he thought Europe immigrated across to him’. This is what defines his relationship with Sofia as one of ‘reverse migration’ and the commodification of sex and marriage. This reality of Maghrebi societies buttresses the truth about sex tourism in Africa, which has been laid bare in the non-fiction of Elias Canetti, Voices of Marrakesh, and Paul Theroux, Dark Star Safari, among others.

From his parents’, he goes to the house of his girlfriend, Naeema, to prepare her for the impending police invitation so that she corroborates his alibi when she goes in for the inevitable questioning. He afterwards turns himself in to the police and tells them his alibi, but this only strengthens the case against him, it seems.

Once the forensic reports come in, confirming Othman’s fingerprints on the knife, the police take that as evidence supporting their suspicions. The homicide detective that is assigned to the case, Detective Alwaar, concludes that the suspect did not tell them about the knife in his statements because the suspect has a mistress he really wants to get married to. When Alwaar discovers that the mistress was the murder victim’s workout trainer and that the suspect is the sole beneficiary of victim’s estate, it appears to be an open-and-shut case.

The Final Bet by Abdelilah Hamdouchi, originally published as al-Rihan al-akhir and translated from the Arabic by Jonathan Smolin, author of Moroccan Noir: Police, Crime, and Politics in Popular Culture, is a suspenseful crime thriller set in the city of Casablanca, Morocco. It is the kind of generic story that somehow manages to go beyond the familiar, and the author’s effective use of foreshadowing heightens the reader’s anticipation of the dénouement.

The novel has for its subtext police incompetence and brutality and the economic constraints faced by young graduates in Morocco. The author contextualises these, and the chequered history of the Moroccan police is vital to a deeper appreciation of the novel. In the afterword of the book, the translator comments on police brutality and corruption in that dark period of Moroccan history known as the Years of Lead:

Synonymous with cruelty, capriciousness, and corruption, the police of 1970s and 1980s Morocco were widely feared and hated. Even uttering the word ‘police’ in public during the Years of Lead was considered taboo (p 135).

By thematising police brutality, Hamdouchi questions the moral and ethical standards of the police, adopting a psychological approach in an attempt to demystify them. The Egyptian novelist, Alaa Al Aswany, in his essay, ‘How Do Police Officers Celebrate Ramadan?’, also poses this same question but in a satirical and rhetorical manner:

This is something really strange that deserves thought and study. How can a police officer torture people and then resume his life afterward as though nothing has happened? [Does] police work dispose officers toward some pathological sadism whereby they enjoy torturing other people?

This is a question that must be answered if democracy and freedom of expression are to survive.

In his depiction of the Moroccan police force, Hamdouchi’s book peers into the abyss of dysfunctional policing. What Hamdouchi suggests is a fresh beginning, calling for reforms that check abuse. There must be checks and balances to keep the police in line, or else they will become uniformed terror. In this regard, the setting of the dénouement of The Final Bet, a courthouse, is significant.

Photograph: ‘The Kitchen Massacre’ by Only Alice