Rhetoric of Pain and Other Resources 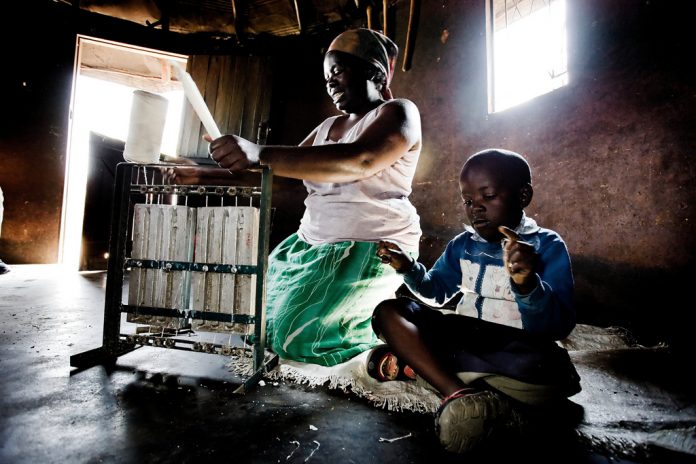 Pain sells. It is from it that the most beautiful expressions are fashioned to last in time and memory. There has been an attempt to explore the poetics of pain, anguish and feeling in a world where the economy is deception and its currency is ‘fakeness’. That attempt is Harriet Anena’s A Nation in Labour. A Nation in Labour is a four-part treatise that uses elevated language to tell of horror. Anena’s collection of poetry warns society about its warped value system through a disciplined use of satiric responses that resonate. Each part of the treatise soaks our dessicated humanity in fluid cadences.

A Nation in Labour offers for contemplation Uganda and what it means to survive her. It brings into sharp focus the travails Uganda went through during its Civil War years. With two million people displaced during that period, a rhetoric of pain, as a resource, was surreptitiously created. Dictatorship reigned supreme, which resulted in the loss of more than 300,000 lives while it lasted. The country’s leadership during those times encouraged strife among regions of the country in order to pursue its vendetta against members of a former government. The anguish felt during those years became a foundry of memories, to forge clearer directions for the future for those who survived the turmoil. Awareness of these events as background to A Nation in Labour will aid appreciation of it as the product of pain.

The first part of the collection, ‘We Need No New Madiba’, filters society through several prisms and nudges a slumbering society back to consciousness. The opening poem, ‘Walking on Nails’ registers what to expect throughout the work. The poem’s title is an indication of a thematic responsibility related to anguish and pain. The poet, in discharging this responsibility, says, ‘We strangle life, hammer nails into its head/Without care, we strut through the world!’

The fourth poem of the collection, ‘We Planted Lies’, exposes the mechanics of deceit. Interestingly, the poet’s position is similar to that which is evident in the age-long Yoruba aphorism expressed as, ‘Ilé tí a bá fi itọ́ mọ, ìrì níí wo’, which means that a house built with spittle is sure to be destroyed by the morning dew.

However, ‘Forgotten’ and ‘Let’s Leave’, two poems in the first part of the collection, seem like goats among sheep for being placed where they are.

‘January Blues’ delievers metaphors, paradox and wit in a fine dose, with economical use of language on display. This is evident from the following lines:

Your hands touch something heavy, Emptiness!

And your fingers slip past the hole in the bottom

‘When I Became a Cow’ stands out as a protest against the perverse domination of partriarchy. It renders in uneven lines thoughts on self-respect and worth, diginity of person and gender equality. The poem is one more jagged flash of lightning in the gathering storm against partriarchy.

The second part of the collection, ‘We Are on Heat’, expresses energy, affection and exuberance. A map of sexuality is drawn by the poet, and she makes her readers explorers of wetness and orgasmic breaths.

The poet stands tall on the crest of feminine sexuality with ‘Cat’ and ‘And I Die, Many Times Over’. Both poems offer female sexuality for introspection, and indicate that understanding this phenomenon is only possible through what a woman allows. These are stated in careful lines that manage not to speak about what they are speaking about.

‘Hemline Cop’ and ‘I Bow for My Boobs’ assess the place of a woman’s body in the society, raising the question of its ownership. They both explore how partriarchy impoverishes expression by hiding under structured stereotypes of order. ‘I Bow for My Boobs’ looks like the hammer and ‘Hemline Cop’ the nail to be driven into the skull of partriarchy for the sake of gender equality. In repressive scenarios, ‘Hemline Cop’ will stand firm in the midst of the repression. Lines in the poem read:

And I lay coiled under your armpits

Suffocating from the stench of your mental indecency

But listen to me, Mister

I’ll peck at your skin until you un-cage me!

It is the same with ‘I Bow for My Boobs’ when it apostrophises the female body, the world’s most powerful weapon:

I command you to turn into stones

Send him to the grave

Be my weapon of destruction.

‘Kiwani’ is instructive, explaining how the passage of emotions through the conduit of experience affects our existence and works to reduce it to conspicuous expressions of greed and selfishness. ‘V-day’ deals with the poetry of falling on to grass from an estimable position. Its stanzas offer abruptness in bated breaths to drive home the thematic essence of the work.

‘And We’ll Plant Bullets’ explores the experiences of living in Uganda in wartime. It alleges a conspiracy of our collective aloofness as humanity wastes away. The sub-themes in this part of the collection returns the mind to the concerns of the first part of the collection. In ‘Dry Breasts’ the poet writes:

He is clutching at breasts of the Republic

Squeezing and biting it with 70-year-old teeth

He is blind to the queue of infants behind him

Deaf to their curse

As his wrinkled hands dip into their food

In another place, the poet employs simile to drive her point home. She says in the poem from which the book takes its title:

With a body that can only flip and flap in labour

Cursing the future for coming too soon

And clinging to a grandfather clock

That’s out of tune

Hoping time will do all

To correct a future that has gone askew.

The last part of the book, ‘Scratching Destiny’, is refreshing. The poems are like blossoming petals on a soil that once suffered a protracted drought. In the poem which lends this final section its title, we read:

The sun rises and sheds its rays upon the earth

The wind blows through hills and valleys

Bringing hope for us all

Harriet Anena’s poems shock the mind in the same way that the Harmattan does on hitting a naked body. Even though we all are stakeholders in our histories, Anena has become a custodian of hers with A Nation in Labour. And, it is easy to connect the overall thrust of the poems in the collection to a title that suggests mind-numbing pain. However, the author rekindles hope with the same title as it yet speaks to the possiblity of a joyous ending.

Photograph: ‘Making a Living’ by DFID.