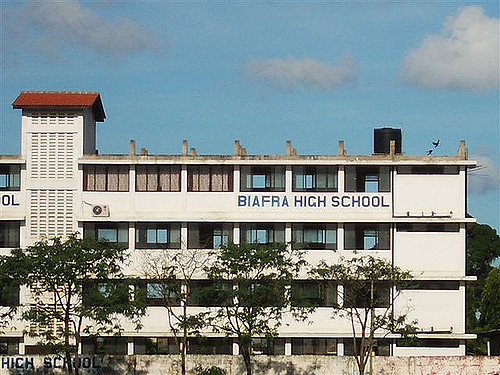 Countries that take History seriously teach it to their children. Some other countries, like Nigeria, dump History off their school curricula, cover it up like excreta and run far from it. That is why Nigerian secondary schools largely ignore the pivotal and contentious history of the Civil War. We must not forget that history has the potential to repeat itself, and the defence against the recurrence of unpleasant events is knowledge and understanding.

This is why Abigail Anaba’s Sector IV can be said to be timely, especially with the renewed agitation by groups like the Indigenous People of Biafra (IPOB) for secession from Nigeria. Since measures like referenda appear to be anathema to Nigerian leaders, the situation might escalate into a full war if matters are not handled with care. The agenda of Sector IV is to warn that war is a costly and harrowing venture.

Although writers hardly admit that they set out with an agenda when they write a book, there is almost always a goal at the back of their minds, a major theme they are trying to highlight through plot, character and dialogue. Anaba, in her preface, declares that she set out to write about the Nigerian Civil War and the stories that may not have been told.

To blend actual events and fiction, an author has to be careful not to end up doing a hack job or trapped by cliché. Thankfully, Sector IV – a blend of history, fiction, romance and tragedy – does not suffer from any of the above. It is a story about love, war, death and loss; it is about choices and their wide-ranging consequences.

Even though Sector IV is Anaba’s debut novel, the reader will detect writing skills that place her far above a neophyte. She takes risks with tenses. She experiments with the points of view of different characters in a bid to cover different parts of the war, which would have been difficult or impossible to do with a single narrator. She is able to pull this off without losing or confusing the reader.

Sector IV opens with a prologue and ends with an epilogue, and it is divided into four parts. The first part and ‘Prologue’, which is titled ‘Revelation’, introduces the main character, Onyinyechi, who at the onset of the war is about to marry Duke, the love of her life. On the eve of her wedding, she is informed that Duke has been killed by Nigerian troops. What is worse, she is pregnant with their child.

In the second part, ‘Exodus’, Onyinyechi’s father abandons the family and enlists as a soldier. Her mother manages to marry her off to Okwuduwa, an impotent trader and a draft dodger. Okwuduwa’s first wife, Ogechi, is having an affair with a Biafran army deserter. These events take place before the war reaches Nchara, the village where they reside.

In the third part, ‘Chronicle’, Okwuduwa learns that the Nigerian troops are close to Nchara and gathers his family, which includes Ogechi, Onyinyechi and her infant son, Udobi, for a journey to Sector IV, which is believed to be the safest part of Biafra.

Crossing into Sector IV requires absolute silence, and Okwuduwa gives Onyinyechi the option of abandoning her baby and following him or staying back with her baby. In a way, this is a choice between Okwuduwa and Duke, whom she has never stopped loving.

The fourth part and epilogue, titled ‘Genesis’, narrates Duke’s story. He faked his death, and we learn that he is a greedy, evil and dishonest person. Sector IV is fluid, has interesting plot twists and can be read in one sitting.

All the elements of war are fully captured in the novel: death, starvation, air raids, desertion of family, desertion of the army, unprincipled soldiers, abduction of women, stealing and apathy. We also see the other side of war, where people fall in and out of love, have affairs, have children and so on.

The book is not a perfect book. There are editorial slips, such as the mix-up on p 31, where ‘James’ is used instead of ‘Duke’, and there are inconsistencies of style, some Igbo words that are italicised in the early parts of the book are not italicised on later pages.

Although South African writers and some Nigerian writers no longer italicise non-English words nor include glossaries in their novels, Sector IV still abides by the old convention of italics and a glossary. Sector IV will make a good read for secondary school students, and will make for a good film adaptation.