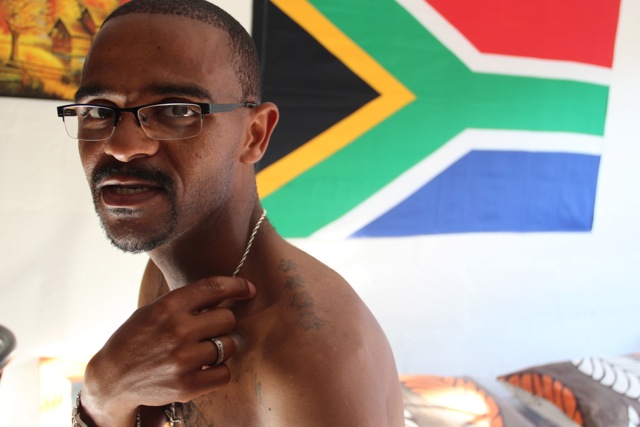 ‘When I first killed a man in Hanover Park I was 13. It’s a great feeling, the feeling I have when I hold a gun in my hand. I have no fear. I get excited…. Every gun is lot of power’ – Clifton, Hanover Park, 2014

Violence is a means of communication. In whatever language it is expressed, its message spreads fast. One of its most insistent messages is that those who receive hurt should return respect. It is this communicative dimension, as an important trait of every human, that the book Gang Town by Don Pinnock explores.

Gang Town chronicles the role of geography in crime, and how adolescence and social dynamics interact as contributors to it. In understanding the epigraph above, it is important to probe the demography of Cape Town, and how it manages to be one of the most sought after cities to visit in the world and also the capital of crime in South Africa.

When night falls in Cape Town, it comes with a blanket of fear. As a victim of gentrification, the city reels from the effect of class-sensitive policies that have chosen to trade the comfort of its poor for other valuables. Typically, the city revolts and this is seen in the high crime rate of Cape Town. By the year 2015, the murder rate in Cape Town was 55 in every 100,000 alone, not considering other crimes like assault, rape, kidnapping, carjacking and arson, as explained in Gang Town.

A study conducted after the passage of the Asiatic Land Tenure Act, also known as the Ghetto Act of 1946, concluded with recommendations which were adopted as the major part of the Group Areas Bill, which was itself passed into a law in 1950. The law established physical settlement according to race. The most striking feature of that law was how areas where coloured people lived were clearly demarcated from those inhabited by whites. That undoubtedly created a social problem for Cape Town. It not only destroyed the communal existence in Cape Town but also injected distrust into the survival system of the city. This meant that the culture on which Cape Town had flourished began to disintegrate, forming subcultures of disgruntlement and social dynamics that have grown into a huge source of concern in Cape Town today.

Also, the working-class family in Cape Town broke down as the economics that sustained them was frittered away. The geographical blunder created by the Group Areas Act soon began to feed the discontent associated with dangerous class divide. This saw to the surge of serious crime among Cape Town’s youth. Considering how much social problems the breakdown caused, households were left to bear the brunt, with firms and the state sitting on their hands. Most families were forced into crime and half the time, the family as a social unit broke down. As explained in Gang Town, from this crack began to rise an army of functionally damaged youth.

In arresting the problem caused by its short-sighted approach in reorganising Cape Town, the government of South Africa decided to step up policing. With personnel of 317 to every 100,000 nationwide, even surpassing the recommended figure by the United Nations of 222 per 100,000, the police in South Africa continues to struggle with enforcing the law especially in Cape Town.

As explained in Gang Town, one of the cogent reasons for stepping up policing was the new Bill of Rights of 1994. The Bill of Rights was to ensure a better socio-political climate in terms of respect for human rights, but it came without taking into consideration the need to graduate from one phase to another. Most communities, including Cape Town, struggled to adjust to the new realities of the law. For example, the police believed that policing methods were less effective after the introduction of the Bill of Rights as the law allowed more rights for the criminal than the victim. This way, the law created more problems where it ought to have brought solutions, which undoubtedly caused friction between communities and the state.

Also, due to the inherent climate of distrust that existed, both sides to law enforcement – the community and the police – failed to communicate well with each other. This actually led to the residents of Cape Town forming their own vigilante groups, like People against Gangs and Drugs (PAGAD), to fill the gap created by this miscommunication and thereby contesting one of the most important roles of the government.

Gang Town further considers the ascendancy of gangs in Cape Town. It is important to note that most gangs sprouted from the breakdown of family structures in Cape Town. Many fathers ended up in jail and their customary roles fell on the shoulders of the mothers. When that occurred, the mothers often collapsed under the weight of the stress thereby transferring responsibility to the children, who were not mature enough to handle such challenges. Often, the children turned to society for help – the same society that put them in their unpleasant situation. This then caused an implosion of values that gave such children the perception that they could only assert themselves through violence.

The problem of Cape Town is cyclic. It began from warped social policies, which upset the family as a unit, to feeding the society’s crime structure then back to using warped social structures to tackle crime.

What makes Gang Town a work relevant to other societies is its understanding of crime as a social dynamic. It identifies adolescence as one of the most crucial points at which to address crime. Putting parenting in the context of understanding adolescents, adolescence is like nesting and incubating an egg to protect it from the hard knocks of life before it matures. However, while protecting this egg, most parents or even the society, break it. This is one major challenge, and it spirals into a social problem.

In identifying the sources of crime in Cape Town, the author traces several causes. One of this is the absence of a father figure in the home, mostly due to the crime enterprise that pervades Cape Town. Given the importance of adolescence in every child’s development and growth, in Cape Town, many fathers are absent. The absence of the fathers in Cape Town naturally makes the children vulnerable to wrong choices that eventually plague the society.

One other important means through which the criminal life in Cape Town feeds fat is the prenatal use of drugs and alcohol by mothers. In the World Health Organisation’s report on Foundation for Alcohol Related Research, South Africa is rated four out of five, with five being the most hazardous and one the least hazardous. South Africans have a cumulative consumption of thirty-five litres of pure alcohol a year. Since foetal exposure to alcohol alters brain structures, it is understandable, how mothers who consume alcohol during pregnancy endanger the lives of their babies even after birth. Also, mothers who smoke during pregnancy pose a huge threat to their babies as studies show that their offspring are twice likely to have a criminal record before age twenty-two.

Gang Town inadvertently lends credence to the popular, Cesare Lombroso idea of ‘criminal according to physical features and make up’. It helps to understand that most criminals are first prisoners of fate. There is ample scientific evidence that points to the fact that people who commit crimes do so as a result of issues beyond their own control. This then poses the problem that if a person with a mental health challenge can be legally absolved of criminal actions, why are persons who have inherited criminal traits from their parents, which they have no power to control, not allowed the same ‘privilege’? This creates a need to revisit and overhaul criminal jurisprudence especially as it deals with the study of crime.

Toxic neighbourhoods also play significant roles in crime especially as it concerns Cape Town. Due to thoughtless social policies, gentrification hurts minds as much as it disrupts geography. The idea of communal neighbourhoods, where training of children is more of a social than an individual effort, is destroyed. The consequence is that criminal enterprise blossoms at the expense of socio-economic values like education. Many, out of fear for their lives, are unable to contribute meaningfully to the growth of the society.

With South Africa as the largest producer of cannabis, producing 2,500 metric tonnes out of the world’s consumption of 8,900 tonnes, the statistics of 17,820 addicts admitted for non-alcohol drug abuse from 2008 to 2010 may be properly used the establish how much of a challenge drug use is in South Africa. This helps to adequately probe the socio-economic role drug use plays in communities to understand the challenges facing productivity through human capital.

According to Gang Town, in the South African national census of 2011, over a million people in the Western Cape were said to be between the ages of fifteen and twenty-four. Drug use is pegged at 12% of the population which means some 120,000 young people could be regularly using Cannabis, Ecstasy, Crack, Kat, Heroin, Fly agaric mushroom, Cocaine, Chrystal meth or LSD. A society where a possible 120,000 out of its million youth population battle drug use already has a problem with maximising its human capital.

The media is also culpable. There is hardly a television or comic book for young adults that does not romanticise violence as the answer to problems. The many that are taught through these media often grow with the pernicious idea and are never able to shake off this thought pattern, which is pervasive. This makes parenting, an anti-dote to the poison of crime in societies, more challenging and difficult.

Gang Town is not only a descriptive work but it is also equally prescriptive in seeking to offer solutions to identified problems of crime in the society. Its historical approach to identifying urbanisation in Cape Town as a major source of the city’s criminogenic traits is instructive, and so also is its solutions map on how to correct the social problem. The work is a fine case for how bad policies lay the foundations of social segregation in African communities, which not only fuels social exclusion but assists in defining survival by physical settlements.

Don Pinnock has been able to dedicate himself to the special problem of crime in Cape Town. Gang Town is not only capable of helping to rework how the world perceives crime but also gives a lot of insight into how to tackle it. Gang Town unsettles what we understand about crime and proffers solutions to an endemic problem in the most reasonable manner. To properly understand the development of crime not only in Cape Town but also in the world at large, Pinnock has helped us with ideas on how to pull the trigger-happy generation of adolescents in a more purposeful direction other than the path of crime.

Photograph: ‘Tattoos Mark Moving up the Ranks’ by DFID