When to Write about Yourself 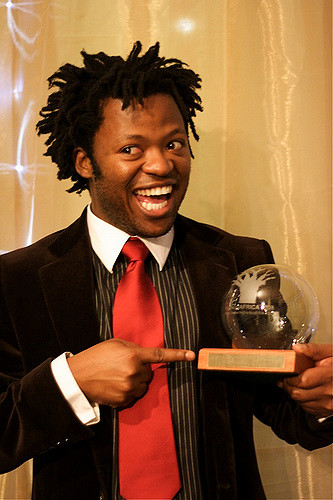 Khaya Dlanga is neither a persecuted writer nor is he an African leader of some repute. He has never been to prison like Ngũgĩ wa Thiong’o or Wole Soyinka. He is not a glorious leader like Nelson Mandela or Obafemi Awolowo, so what gives him the afflatus to undertake the lofty goal of writing a memoir in the prime of his life?

Dlanga explains his motives in the author’s note at the beginning of his book, To Quote Myself, ‘I have become more convinced than ever that in our own ways, we all quietly lead extraordinary lives with extraordinary stories. There are no stories not worth telling’.

Dlanga was brought up in his mother’s family home in Dutyini. His father abandoned his mother for another woman, and his mother had to leave her children with her parents. His grandfather, Alfred Kaiser Boyce, was a big man in the village who had quite a number of livestock. Dlanga grew up in a strict, loving home. They were not wealthy by worldly standards but they were content.

It was an idyllic childhood, and Dlanga could easily have ended up never leaving his humble beginnings, but his mother wanted her son to have an education and be more in life. This resulted in her enrolling him in quality schools even when she did not have the money.

In To Quote Myself, Dlanga narrates a rags-to-riches story that is both moving and amusing. He employs the same skills that made Frank McCourt’s memoir, Angela’s Ashes, such a worldwide hit. Many readers will find themselves rooting for Dlanga and praying that light streams through the dark tunnel for him.

Dlanga’s mother is the real MVP as African mothers are wont to be. Before village life could sink its teeth into him, she took him away from the village to the township to enrol him in a good school. This was a timely intervention because he had just discovered weed and had become a truant. At this point too, apartheid was just being dismantled, so he was able to get a great education even though it strained his mother’s finances.

There was a greater strain on the single mother of four, who had not worked for a decade, when her son wanted to go to the expensive AAA School of Advertising in Cape Town. It was a hard beginning for Dlanga. He clearly could not afford the fees; he could not afford a place to stay. He dropped the suitcase his mother gave him in a church and put his essentials in a small grey bag. He slept on construction sites; he slept in the college classroom, on cold desks. He was a homeless man who learnt how to make do with little sleep and to sleep lightly. What kept him going were faith in his dreams and faith in God.

In this memoir, Dlanga captures the essence of the important Xhosa rite of teenage circumcision, which is also described in the great Nelson Mandela’s Long Walk to Freedom. The practice is criticised in many quarters due to the grim statistics of lives it takes. But it is something Dlanga is proud of and he dedicates a full chapter to walking the reader through the experience. The pain might just be a glimpse into how tough manhood and life can be.

Dlanga’s story is fast-paced and told like a comedian performing at a live show. The gist sucks the reader in and the reader luxuriates in the sweetness of the tale but at the end the mind registers the message. The sojourn recorded in the book stays with the reader, just like John Bunyan’s Pilgrim’s Progress.

To Quote Myself is a disciplined work. It does not take pointless detours or drag the reader to places where they do not need to be. The editing is well done. Dlanga’s writing skills are above par, years of blogging have refined his writing, and years of copywriting have also equipped him with the ability to be economical with words.

For financial reasons, Dlanga had to drop out from AAA in his second year. He worked as a waiter for some time and did other odd jobs, but he never gave up on his advertising dream. The universe eventually opened up a space for him. It started with him sending a wildly creative CV to the advertising firm of Lowe Bull Calvert Pace, backed up with an interesting portfolio, which he created while in advertising school. He got his journey into the advertising world.

Dlanga has since won many advertising awards, including several Loeries, a Loerie Grand Prix, multiple Gold Cannes Lions, and a Black Eagle amongst others. After paying his dues and garnering a lot of experience he finally got a job in one of the biggest companies in the world, Coca-Cola.

It is also noteworthy that Dlanga tried his hand at a number of things. He moonlighted as a stand-up for a period of time. After garnering some ovation for his intelligent jokes, he walked away from it when he felt his time was up. He also was a video blogger at the outset of YouTube and became one of the top uploaders in the YouTube ecosystem. He even got a chance to ask President Barrack Obama a question in 2008, when Obama was running for president.

It is clear that Dlanga is a creative person who is always looking for opportunities to explore his creativity. To Quote Myself reveals the price the author has paid to better his lot. Dlanga worked hard for everything he got. He was also lucky to have a family that gave him opportunities, space to develop his skills and an understanding of the value of true education.

To Quote Myself offers an excellent mode of memoir writing, and African literature is better for it. It is good that memoir writing is evolving from writers writing about tales of fighting dictatorships and external strife to the struggles that millennials experience, and this is something young people can learn from.