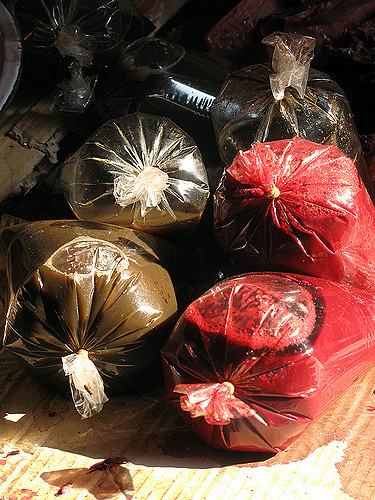 Melancholia is a play written by the Nigerian playwright Dul Johnson, who has been writing radio and television plays since the ‘80s, although at times under the pen name Jim Rogers. He is also a scholar who has held teaching positions at the University of Jos as well as National Film Institute, Jos. In a play that plumbs the depths of satire, the playwright tackles head-on the political scene in Nigeria, pre- and post-election, dramatising it in two acts with four and five scenes respectively. It is a play festooned with the physiological ideas of the ancients in such striking manner, the sort that most distinctively disentangles ‘the doctrine of the four temperaments’.

Humouralism, which can be accounted for by a strict combination of ancient Greek principles, is explored through Mumude Bawa, a presidential aspirant, whose character goads the reader to enquire about the quality of individuals who aspire to lead Nigeria. Published in 2014, about a year before the Nigerian presidential election of 2015, the chance exists that a cursory reading of Melancholia might lead to the assumption that the play aimed to be prophetic, but that would be a misreading. Of course, such a reading would find support for mistaking Mumude Bawa for a caricature of President Muhammadu Buhari in the fact that Mumude is an ex-military officer.

Naturally, and this much is conceded, in drawing the attention of his audience to the general state of affairs in his beloved country, the playwright seeks to remind us all that the temperament of Nigerian leaders, as characterised by Mumude, is most exemplified by her military class, who only exchanged their khakis for agbadas in the last seventeen years. Melancholia’s narrative sits comfortably with Chinua Achebe’s assertion, ‘The trouble with Nigeria is simply and squarely a failure of leadership’.

Agreeing with Achebe, like Johnson does, this reader is compelled to examine Mumude’s temperament within the framework of humouralism, a system of medicine that details the make-up and workings of the human body. It posits that an excess or a deficiency of any of the four bodily fluids – known as humours – in a person directly influences their temperament and health. These four humours – namely blood, yellow bile, black bile and phlegm – stand for different attitudinal dispositions. Blood, the ‘sanguine’, is sociable and lively; yellow bile, the ‘choleric’, is egocentric and extroverted; black bile, the ‘melancholic’, is suspicious and introverted; phlegm, the ‘phlegmatic’, is thoughtful and patient. In the first act of the play, Mumude comes across as suffering from an excess of yellow bile in his body.

At the time we meet Mumude, a middle-aged, over-ambitious politician running for president, he is seen courting the support of Dangiwa, his uncle, and Jatau, an ‘estranged’ friend. In doing so, the playwright reveals the mentality of the average Nigerian politician tethered to the idea of machine politics. For instance, in offering Dangiwa the position of campaign director, we learn that Mumude has spent one hundred and sixty billion naira, raised from bank loans, donations from friends and political associates as well as the mortgaging of his properties. The offer and Dangiwa’s principled refusal bring into sharp focus the means and cost of funding election campaigns.

Ignoring Dangiwa’s counsel not to run, Mumude’s visits Jatau to offer him the job of campaign director. In the ensuing dialogue, we discover that Mumude plans to make the service chiefs of the armed forces chairmen of boards of parastatals. As Mumude and Jatau set about discussing issues around his campaign speech, we come to realise that neither the presidential aspirant nor his campaign director has given much thought, if any, to either policy or manifesto. Mumude and his friend both agree that Jatau should scribble a speech full of lies, for which purpose Mumude drops one hundred thousand naira, for paper and pen. Melancholia calls attention to this sort of concord.

By the time Mumude’s campaign is fully underway, what emerges is the picture of an aspirant fixated on selling pipe dreams to an electorate. As he comes under the close scrutiny of a section of the electorate at a campaign rally, the play shows us that most of those who aspire to lead Nigeria are drawn from the ranks of political jobbers, who have no clue as to how they intend to effect any change to the system. The character of the TV host in Melancholia, who is saddled with the task of announcing election results, admits this by saying, ‘[I]t is sad that most people seeking to lead this country do not seem prepared for the task, don’t even seem to know what they want to do in the office’.

As already compiled results are being announced, the playwright employs the symbolic use of darkness, occasioned by a power cut, as a plot device to hold readers in suspense. By the time the play transitions into its second act, the reader cannot quite tell immediately if Mumude won or lost the election. Melancholia makes use of Chekhov’s Gun, a dramatic principle first articulated by that Russian playwright, who recommends that if you put a gun on stage in the first act of a play, it should be fired in the second act. And so, Johnson places the gun, machine politics, on the mantelpiece in the first act but only fires it in the second, to a resounding anticlimax.

The second act begins with the reader still in the dark about the election’s outcome, several months after the voting. However, we are presented with a despondent Mumude who does not seem to have come around to the idea that he may not have won the election. He carries on as president-elect, and that is possible in part because Jatau and his son, Kallo, indulge him. Ade, his daughter, on the other hand will have no such rubbish. In calling a spade a spade, it is mostly through her that the reader comes to grips with ‘the doctrine of the four temperaments’. In fact, it is she who blurts out the words, ‘[I]t is time for his medication, please cut this out now’. The reader gains a knowledge of his melancholia, the effect of black bile engulfing Mumude’s body.

Mumude’s theatrics are useful only to the extent that they reveal his temperament and the mindset of those kinds of people the TV host describes, and in so doing ignites a conversation around how machine politics holds socio-economic development hostage in Nigeria. Watching Mumude assign all sorts of imaginary portfolios to his son, daughter, uncle and friend, while heavily indebted to political associates who financed his campaign, the reader sees a portrayal of patronage systems and how they work. The dramaturgy is evocative of the Nigerian state in that its representation reflects how patronage jobs are used to reward loyal party workers.

The play reaches an anticlimax when Mumude ends up in the hospital. And there, through precise detail in the exchanges between Mumude, the doctor, a nurse, Kallo, Dangiwa and Jatau, our dramatist instructs us by a stubborn insistence, geared to impress on the mind of his audience the diagnosis that our country is in a state of inertia, in a state of coma – a blackout. From the doctor we learn that the cure for the country – just like for Mumude, who has just accepted that he lost the election, about two years late – ‘must come from a painful dose of the antidote’.

Melancholia sets folk like Tolu Ogunlesi, who was recently appointed presidential special assistant on new media, the task of emulating Ade, Mumude’s daughter, by seeking rather early, a cure for the temperament of those who ‘aspire’ to lead Nigeria. Ogunlesi on 6 April, 2015, in his piece titled ‘Letter to Muhammadu Buhari and Yemi Osinbajo’, published by the Premium Times, claims the ‘buffoons and jesters’ that surrounded President Goodluck Jonathan ‘kept him detached from reality’. Our compatriot goes so far as to say, ‘[O]ur leaders need an antidote to the reality distortion fields of the presidential villa’. Will he insist that the president take this antidote?