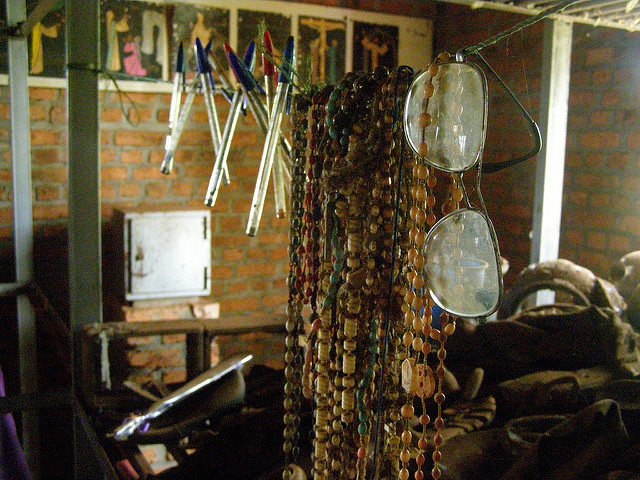 In The Ghosts of 1894, Oduor Jagero does not only revisit the scene of what is perhaps Africa’s most brutal event of human rights violation, he also examines its root causes. It is a tragic story told mostly through the eyes of the characters Habineza, Vestine and Sandra, survivors of the Rwandan genocide. Given the novel’s title, students of African history will instantly deduce that the book fingers 1894 – the year in which explorers led by the German Count Gustav Adolf von Gotzen set foot in Rwanda – as the exact point in history when the country’s ghosts came into being.

This absorbing tale of immense human tragedy, spanning the countries Kenya, Rwanda, the Democratic Republic of the Congo (DRC), Uganda and the United States of America, poses serious questions to us all. In the prologue, we learn that Habineza and Vestine, two Tutsis who fled Rwanda in 1994, are caught up, yet again, in the middle of ethnic violence, but this time between Luos and Kikuyus, sometime around 2007, in Eldoret where they have been living in exile.

Faced with the violence brought on by that much disputed Kenyan election between President Mwai Kibaki and opposition leader Raila Odinga, Vestine, who now has a child for Habineza, goes down memory lane. Deploying flashbacks to amazing literary effect and through use of adroit technique, the author opposes the evil machinations of genocidaires by telling a story that wages war against genocide. By giving voice to the survivors, thus taking us on a journey through the interstices of what the Senegalese writer, Boubacar Boris Diop, describes as ‘essentially an example of the deplorable excesses of tribal barbarism’, the novel becomes a funerary stele.

The actual story begins when we meet Habineza, the owner of a flourishing real estate business in Kigali who is facing persecution, having just rescued his children from kidnappers. He is perceived by his persecutors to know something about their ‘open secret’. But what really is this secret? Another reason he is persecuted is for his association with his tenant, Vestine, who is married to a Hutu intelligence officer. For fear of his own life, Vestine’s husband flees the marriage – for a Hutu officer, being married to an Inyenzi is a heinous crime that can no longer be overlooked.

Unlike much of Africa, Rwanda’s own fate was far from decided at the 1884 Berlin Conference. The history of the people of Rwanda, Banyarwanda, which Habineza fastidiously traces out for Sandra’s benefit, highlights the pitfall of Diop’s framing of the Rwandan genocide. Plot-wise, Jagero deftly shows how those whose basic instinct is to interpret the genocide in terms of binaries, executioners versus victims, miss the real lessons of that tragedy. In this regard, The Ghosts of 1894 challenges the types of narratives that the historian Jean-Pierre Chrétien calls ‘ethno-historic gospel’.

Rwanda before the advent of the Germans and Belgians hardly thought about herself along ethnic lines. One suspects that ‘the ghosts’ in the title of Jagero’s novel refers as much to the invasion of Rwanda by both Germany and Belgium as it does to their colonial legacies, which heralded the introduction of ethnicity into Rwanda’s process of independence. Listening to Habineza respond to the question from Sandra, ‘Is there anyone else in your family called Habineza?’, we begin to come to terms with the story of the Banyarwanda people:

Yes, Habineza and Chrétien are essentially speaking in unison. Habineza speaks to the fact that Rwanda in the pre-colonial era was de-tribalised and did not care about the Hutu-Tutsi divide. They all lived together as the Banyarwanda people. Chrétien also argues that Tutsi hegemony took hold in Rwanda because of a 19th century myth propagated by European travellers. This myth, incorporated into history books, hinges on claims that Tutsis were a Hamitic people who overran Rwanda and enslaved the Hutus.

The fatuousness of the myth that Habineza is contesting demands that we also arm ourselves with both a knowledge of why and how the Belgians invaded Ruanda-Urundi, a German colony in 1916, as well as how, subsequently, Belgian colonial rule inadvertently sparked a Hutu Revolution in 1959. Without such knowledge, it would be hard to discuss, constructively, the ethnic sentiments at play during the formation of both an independent, Hutu-dominated state in 1962 as well as the Rwandan genocide of 1994.

In the late 1930s, as priests from the Belgian province of Wallonia arrived, they began to ‘empower’ Hutus. By October 1959, the Hutus had organised themselves into a political party, Parmehutu, whose militant members revolted against the colonial power’s local authorities in November 1959. They killed some Tutsi chiefs. Of this Habineza says:

Then entered the Walloons, the sorcerers from River Meuse. They were like a book you could not easily judge by their cover. They appeared amiable and of convivial disposition. But their treachery lay in the blueness of their eyes. Beneath their laughter hid their divide and rule ways. Their sociable attitude enchanted the chiefs and endeared them to Banyarwanda. But as we would soon find out, the laughter was only the hisses of a snake.

Taking the tragic story forward, it is through Sandra’s character, as an American journalist working for The New York Times and as a survivor of the 1994 genocide, that we observe how the author of The Ghosts of 1894 steers the conversation towards the human cost of our silence in the face of human rights violations. Sandra’s dedication to duty makes it possible for the world to hear all sides of the Rwandan story. It is because of Sandra’s reportage, that we learn that plans to exterminate the ‘cockroaches’ was an ‘open secret’, and it is from her point of view that we are able to interrogate the French government’s involvement in Rwanda.

In the aftermath of the 1994 genocide, the second epigraph of this essay, supplied by none other than Wole Soyinka, who wrote in 1996 to remind and warn us that the ‘graves are not yet full’, had become and remains pertinent. David Van Reybrouck’s Congo informs his readers of how, in October 1996, at Paul Kagame’s instigation, four men, led by Laurent-Désiré Kabila set up Alliance des Forces Democratiques pour la Liberation (AFDL), not only to neutralise the routed Hutu refugees regrouping in Zaire but also to topple the government of Joseph-Désiré Mobutu. The ensuing struggle between Rwandan Tutsis and Hutus devastated Bukavu, in South Kivu, and Goma, in North Kivu, two towns in the DRC, on the border with Rwanda.

Rape in war is as old as war itself. But the intimate nature of sexual assault means that the horrors often go undocumented, sanitized out of history books and glossed over in news accounts that focus on casualties and refugee numbers.

Put into context, Baker draws attention to Bukavu and Goma. These two towns are central to the story Jagero tells in The Ghosts of 1894.

Counting the cost of genocide, as Diop demands literature must to do, we could take a cue from the journalistic work of Sandra, a victim of rape by the interhamwe, which shines the light on the situation in DRC. To do so brings into focus the question of the 1.5 million Hutu refugees (some of whom are genocidaires) that French soldiers helped flee into Bukavu and Goma. Two towns in a country dubbed the ‘rape capital of the world’ and that still carry the burden of genocide.

African writers and intellectuals have a sacred duty to spark outrage, in so far as it remains possible that our amoral code of silence still disregards Immaculée Ilibagiza’s assertion, deployed as our first epigraph. This sacred duty, Alex de Waal says in his essay ‘Writing Human Rights and Getting It Wrong’, recognises the urgent need for narratives that show how ‘human rights should make no distinction between political allies and adversaries: all should be held to the same standard’. The Ghosts of 1894 is a fine novel that rises to the challenge of our sacred duty by eschewing the singular Rwandan narrative of genocide.