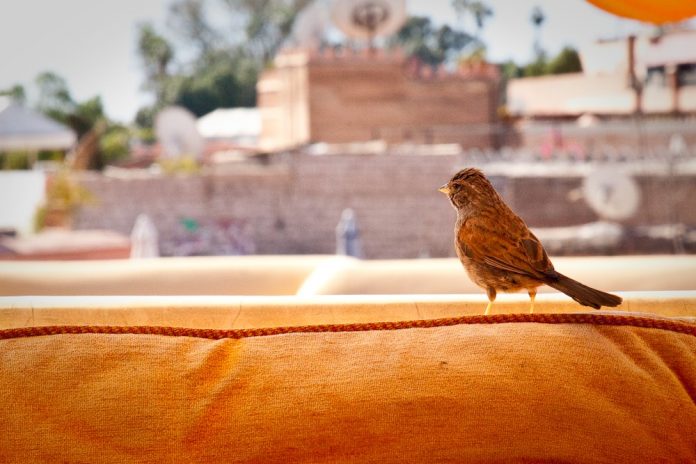 Silencing the Songbird is the playwright Bouchaib El Idrissi’s artistic response to a popular myth that was created around the real life of a very popular singer, Huidda Al Ghiata, who also went by the moniker Kharboucha.

In this remarkable tragic play, Kharboucha is a member of the Quled Zaid tribe. She pours her heart out in ‘profuse strains of unpremeditated art’ through songs for her rebellious tribe, during a popular uprising in the Abda and H’mer region of Morocco, at the turn of the 20th century. She is our archetypal songbird, the sort that poses a grave threat to despots.

It is oft said that a book, when necessary, should be a hand grenade of some sort, which should be detonated under stagnant ways of looking at the world. El Idrissi’s Silencing the Songbird does exactly this in a manner that never tires of using words as well as vivid imagery to punch holes inside his audience and/or readers.

The Abda and H’mer region is west of the ancient city of Marrakesh in Morocco. Upon reading the foreword to Silencing the Songbird, by Mohamed Oujetti, we learn that in spring or early summer, on the plains of Abda and H’mer: ‘If you have a keen eye – and ear – for nature, you may see, on the grass in the alleyways between the fields, a small brown bird with dark spots – pied beauty – trying to camouflage itself among the grasses or between the brown clay clods and looking back at you with shiny black eye that knows no fear’.

Oujetti’s observation is instructive, especially as he tells us that: ‘the same bird may twitter and flit here and there before suddenly flying and soaring in the sky, and you may not see it cruising the air until it becomes almost an invisible spot in the sky, where it planes and hovers while singing ferociously. No other bird species does that, namely sing to itself in mid-air’.

This is the kind of bird El Idrissi deploys as apt metaphor in the title of his ‘dangerous play’. Fortuitously, Silencing the Songbird is set in Marrakesh, a city the Nigerian poet laureate, Tade Ipadeola, in his epic poem, The Sahara Testaments, describes as a hummingbird standing still in the sun. Marrakesh is perhaps the most important of all Morocco’s four imperial cities, and it is the fourth largest city after Casablanca, Fes and Tangier.

The burden of introspection requires the sort of close reading of Silencing the Songbird that should help us ponder an incontrovertible fact: though we all are witnesses to ‘an Arab World wracked by wars, sectarian massacres and violent religious extremism, Morocco looks like an oasis of stability and relative freedom’. Nevertheless, we must never suffer selective amnesia to the extent that we fail to remember that ‘the North African kingdom is hardly a democracy, with King Mohammed VI firmly in command of government, judiciary, and military’.

It is against this backdrop that the play spins precariously along the axis of a conflict between art and power. This theme probably explains why Oujetti makes a concerted effort to remind the reader that ‘the real life Kharboucha was not just a popular singer but a poet who knew by intuition how to use the power of the word against the power of force’, an intrepid poet to say the least.

In a manner almost reminiscent of the tortuous ordeal faced by Wafae Charaf, a left-wing activist who is currently serving a two-year sentence for allegedly slandering the police and ‘falsely reporting’ that plain-clothed men abducted and abused her, Silencing the Songbird opens with an unnerving scene where we find that Caid Aissa Ben Omar, a man in his fifties, and Kwider, his servant, are, amongst other deliberations, hatching a devious plot to abduct Kharboucha. Their intention is to silence the ever melodious voice of the most popular sheikha singer, who purportedly uses it to incite her people, the Quled Zaid rebels. The Caid goes as far as to threaten to cut off Kharboucha’s tongue, which she is said to have used to slander this regional governor.

By the second scene in act one, Kwider makes good on his word to apprehend Kharboucha, who he ushers into the presence of the Caid. In the ensuing dialogue, we become acquainted with the antics of Caid Aissa Ben Omar. He tries to entice and altogether inveigle Kharboucha, showering her with praise. He even proposes marriage, promising her everything under the sun if only she desists from insulting him in her songs. He is even willing to permit that she keeps her loving relationship with the peasants as long as she never sympathises with them against his rule. But Kharboucha wants nothing to do with him as she has already fallen head over heels for his son, Hammoud.

Not only does the approach Caid Aissa Ben Omar adopt in his bid to woo Kharboucha reek of unbridled condescension, it shows up the patriarchal structure of the Moroccan society for what it is – oppressive. Nonetheless, it is Kharboucha’s defiance, in the face of oppression and demands to be submissive, that offer us a handle with which to open the door to discourse around feminism’s reactionary response to both the exclusionary and discriminatory concept of patriarchy. In this connection, it is important to note that Silencing the Songbird’s first mandate is in the same spirit as the second epigraph to this essay.

Through Kharboucha’s tribulation, the playwright indicates his agreement with Augusto Boal by labouring, assiduously, to show that feminism is becoming not being. Feeding off the strength of her own conviction and by show of an exceptionally strong resolve – one that refuses to compromise the legitimate struggle of the Quled Zaid rebels, who by the way are all men – our songbird Kharboucha shines a torch on intersectional feminism. She eschews the theoretical understanding of patriarchy as ‘the rule of men’, a view espoused by the radical feminist, Kate Millet, who in her work Sexual Politics holds that since women are always and in more ways than one oppressed, exploited and/or dominated by men, the concept of class in relation to said oppression of women is always transitory and illusory.

To understand the full import of the second mandate that El Idrissi’s Silencing the Songbird aspires to fulfill, we basically must turn our eyes towards an observation in Fouad Laroui’s The Curse of The Moroccan Writer where he points out that: ‘between classical language, various dialects, language of the ex-colonizer, even languages with no local ties (we’re beginning to see Moroccans who publish in English), the Moroccan writer really doesn’t know where he is or who he is’. Just as well, we should juxtapose Laroui’s observation with Nehru Odeh’s question to Professor Dapo Adelugba, ‘Who does the English language theatre speak to? It is usually thought of as elitist, that is, not really pondering on the problems of those at the grassroots. What is your view?’

Fastidiously, Adelugba holds the view that while it is true that there is a certain elitism in the language of certain plays in English, especially those written in an English that is dense and makes it difficult for the ordinary person to gain access, there is a chance that the ‘elitist theatre can be made popular by a simple process of translation into indigenous languages’.

It becomes pertinent at this juncture that we establish why – like Laila Lalami, for example, who started writing in English in 1996 after having written in French for several years – El Idrissi who previously wrote in Arabic decides to write this play in English.

The Moroccan writer is faced with the question of diglossia, which arises because without exception, though to differing degrees, almost all Arabs speak one language (Darija) and write another (Classical Arabic). The ‘high’ variety (Classical Arabic) is restricted to formal situations, and the ‘low’ variety (Darija) is used for everyday interactions. Moroccan writers who take up the pen and do so in Arabic, form an elite who write for an elite because an uneducated Arab youth cannot even begin to read a highly literary text written in Classical Arabic – for such a person, all words, syntax, verb forms, etc might as well be in a foreign language.

Ipadeola’s quatrain only begins to chime in, when we take full cognisance of the fact that in Darija, which everyone speaks in Morocco, almost no texts exists, to say nothing of the Berber question.

Considering that the print run for the most celebrated Arabic writer, Naguib Mahfouz, does not surpass ten thousand for a potential readership of two hundred million, it is perhaps safe now to infer that for Lalami, writing in English affords her more visibility. There is no gainsaying the fact that English is the most read of all the ‘elitist’ languages.

In this regard, El Idrissi in Silencing the Songbird fixes the readers gaze on a lingering question: in what language is Morocco’s national literature? He also debunks the alarmist view that English language theatre is dead.

Several forces determine Silencing the Songbird such that faced with the choice of a language with which to convey his message, El Idrissi reposes his trust in the grand equaliser that Adelugba points us to: El Idrissi can write in whatever elite language of the world he likes, what is important is how and when his work is translated for the Arab youth and other youth of the world.